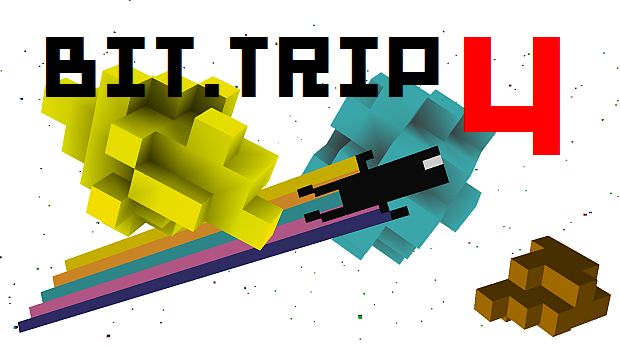 This has been quite a week in Gaijin Games. We’ve brought you all sorts of exclusive coverage, from the latest game in the series, BIT.TRIP Void, the past and future of Gaijin Games, defending Nintendo,  announcing official soundtracks, and bringing one-of-a-kind goodies to a special winner.

But now that we’ve reached the end, there is really only one more place to go: what in the world is Gaijin Games coming up with next? BIT.TRIP Void is completed and ready for release, with only a word from Nintendo to send the game onto WiiWare. Other than that, Gaijin Games has to be working on a new title. right?

Thankfully, they were more than willing to discuss what is coming next for the studio. You’ll just have to hit the jump to find out what it could be.

In getting ready for these games, for there is certainly a plurality of games, the issue of inspiration was something we spent some time addressing. Each member seemed to have a different form of inspiration that bleeds over into their games. For director Alex Neuse, the issue was less of one of art or beauty, but he really seemed to find inspiration in pure gameplay. “I have found that I am a designer at heart. When I play games at home, I have found that what inspires me is not art it’s not necessarily sound, it’s not flashiness, it’s gameplay. It’s something new,” he says, “I will play something that looks like crap, but rather is fun rather than play something that plays average in terms of fun but looks beautiful.”

While the other members of the team certainly shared this sentiment, they found other ways in preparing for the next games. Art designer Mike Roush specifically named “listening to ridiculous techo music,” as well as a watching a lot of movies as a way to be inspired. Whether it is a BIT.TRIP game or some other product, he says that “film will make its way into any videogame I’m making, in some weird way.”

And slightly odd for a team known for making rather unique games, engineer Chris Osborn pointed his respect to really solid mainstream games. Products like Modern Warfare 2 are something he holds great respect for, as that stands as a title that is so fantastically well made, he can aim to emulate it in his own way.

Now, all these forms of inspiration are moot if there is nothing worth backing it up upon. Thankfully, Gaijin Games has three brand new titles that they are working upon. This first title is actually something pretty special for the company. For the first time ever, they are publishing a game by another indie development team, saying that it fits well into the goal and personality of Gaijin Games. they won’t be making it, but they really see this opportunity as a way to expand their company.

Even more interesting is a new title that they would only remain ambiguous when discussing. All I can confirm is that A: it is going to be self-published, B: that it is going to be on WiiWare, and C: that it is going to be the most beautiful game ever made on the WiiWare service. This is Mike’s special goal, so much so that he has been working over time at home making sure the art and design is fabulous. I’ve been promised it’s going in wild new directions for the team.

Destructoid exclusive here: this game is going to be a puzzle game.

Finally, there is the next chapter of BIT.TRIP. Game 4 has just been started by the team, and when gamers play it, I’ve been promised things will be a little different. “The fourth game in series is really the beginning of the end of the story,” says Neuse. “This is the first game in the series where we focus less on the abstract and more on the literal. If you think of Beat, Core and Void, those are very abstract games with abstract ideas behind them and abstract themes. With BIT.TRIP 4, you are going to see very literal interpretations of what’s going on now.”

His discussion points to some interesting topics. For theorists about the actual plot of the BIT.TRIP franchise, Neuse pointed out some really neat imagery, about how the previous BIT.TRIP games is dealing with CommanderVideo coming to grips with himself, and that Void will showcase CommanderVideo come to grips with dealing with other beings. This plot fits the nebulous nature of Void as a game, with the black beats exemplifying good parts of life, and the score killing white beats meaning the bad parts of life. The goal of Void is to juggle the good and the bad, and to come to grips with this duality of existance by growing bigger on the good things (i.e. growing larger in game) and returning to Earth before your head gets too big (with the push of a button or the unfortunate collision with a white beat). It’s all pretty ambiguous, and that’s how Gaijin likes it.

But Game 4? Well, that’s a bit clearer. “Transitioning to the fourth game, you’ve mastered all of these things that have come on before, and you are ready to head out into the world and take it head on, go ape-sh**t and charge through the whole thing, and that is what BIT.TRIP 4 is all about.”

Thankfully, Gaijin Games gave Destructoid an extra special peek at some of the artwork for BIT.TRIP 4. Right now, there is literally one screenshot of the game, but it’s very clear what direction Gaijin Games is going to take the series. Unfortunately, I pinkie-sweared that all I could mention would be neutral descriptions about this game, such as that it plays with a very popular older genre. I will say this, that if you notice that all the former BIT.TRIP games pays tribute to older classic games, this one pays tribute to one of the most influential classic games ever made. That’s pretty much all I can say, but fans of the BIT.TRIP series, be excited, and look out for game four early next year.

So this is where we leave Gaijin Games. They’ve got some pretty amazing things planned for themselves and gamers in general. Keep an eye out, and an ear out for this company. With smart heads, clear vision, and the balls to really rock out something new, there is no reason Gaijin Games shouldn’t become a name to really notice.