I looked into the void, but it didn’t look back

[Spoilers for the end of Galak-Z below.]

The conclusion of Galak-Z‘s original four-season story mode ends on an ominous note. A-Tak and his crewmates in the Axelios have fought and scraped and bled their way through half the galaxy and it looks like they’re finally in the clear. But, the Baron of the Imperial fleet chimes in on the communicator. He smugly reveals, in classic villainous fashion, that all they’ve accomplished is the certain doom of their home planet, Earth. Unknowingly, A-Tak did the dirty work for the Empire, taking out the competition, leaking the previously hidden coordinates of Earth, and serving it all up on a silver platter. Played like a damn fiddle.

With Earth’s own fleet in tatters, and no way to warn home of the impending armada heading their way, it looked like the plucky crew of the Axelios was going to have to wage a one-ship war against an entire army. It was an exciting cliffhanger to end on, a nod to the classic anime that inspired 17-Bit Studios, and one it promised to address in a final, post-release fifth season update.

Fans have spent the past eight months looking at a “Coming Soon” message on the season select screen. Patiently waiting for the chance to take on the Imperial fleet and the Baron. To finally end A-Tak’s story once and for all.

So, who’s ready for an endless score-attack mode instead? 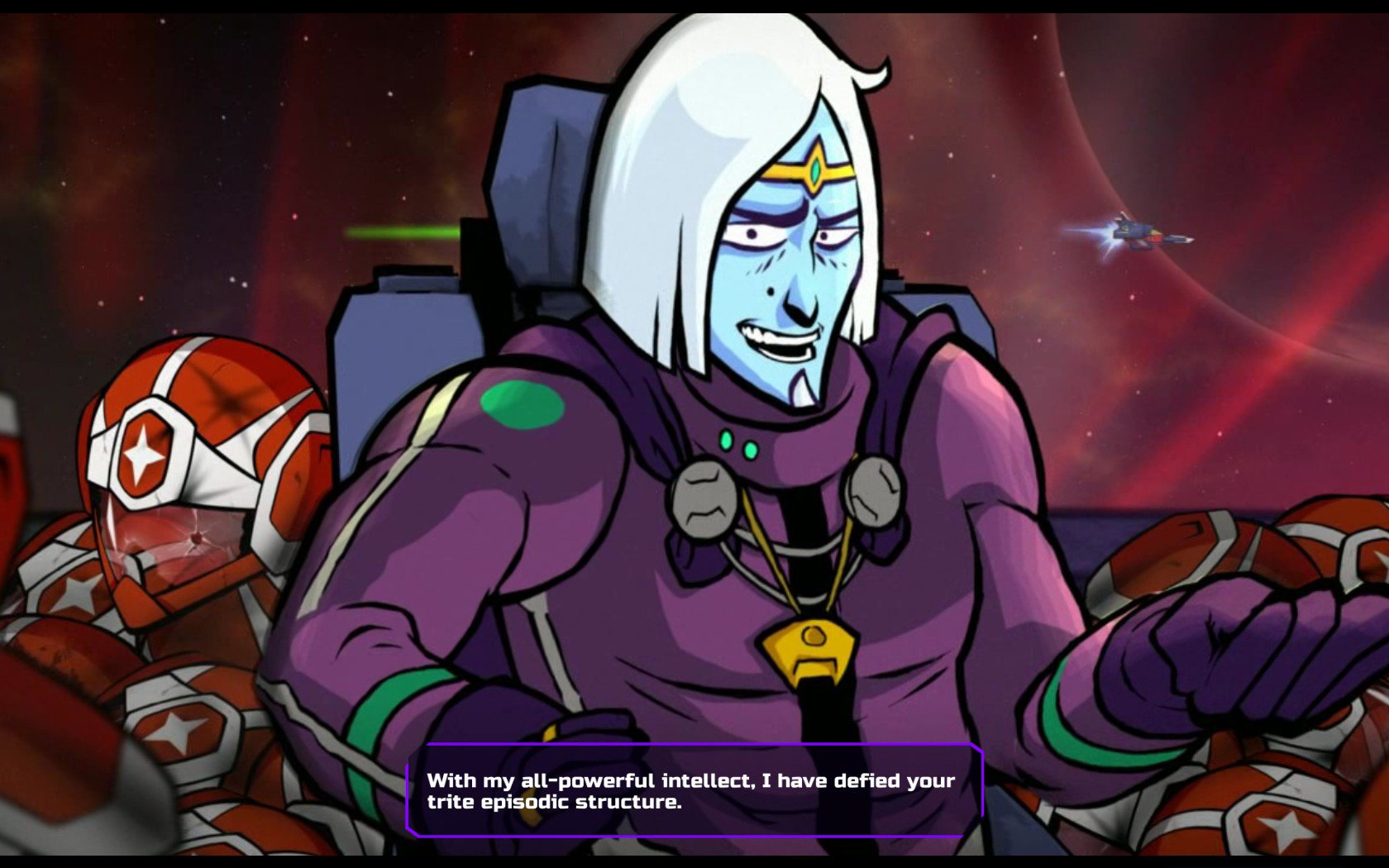 There is no way around it: Galak-Z‘s The Void update is a bit of a dodge. Positioned as a substitute for a proper final season based on player feedback, The Void is an endless challenge mode, and not the fifth season players were expecting. It’s loosely tied to the story with an intro that, perhaps misguidedly, pokes fun at the upset expectations and introduces a Sliders-esque series of parallel dimensional rifts (the titular void) to fight and inevitably die in.

The goal is to make said death as glorious as possible. Defeat enemies, scoop up scrap, and stay alive as long as possible to set a high score on the leaderboards. While I have no doubt there is a segment of the Galak-Z fanbase that has been clamoring for this kind of mode, it’s hard to believe anyone wanted this more than the proper conclusion fans were promised they’d receive before the game even launched.

At least what is here is pretty damned solid. Yes, The Void is a score-chase mode that probably should have been included at launch and certainly should never have been brought out as a replacement for the finale, but it is a good score-chase. Galak-Z‘s frantic, unique ship/mech-based combat is still a joy to engage in and this is a good way to just get knee deep in it on demand. 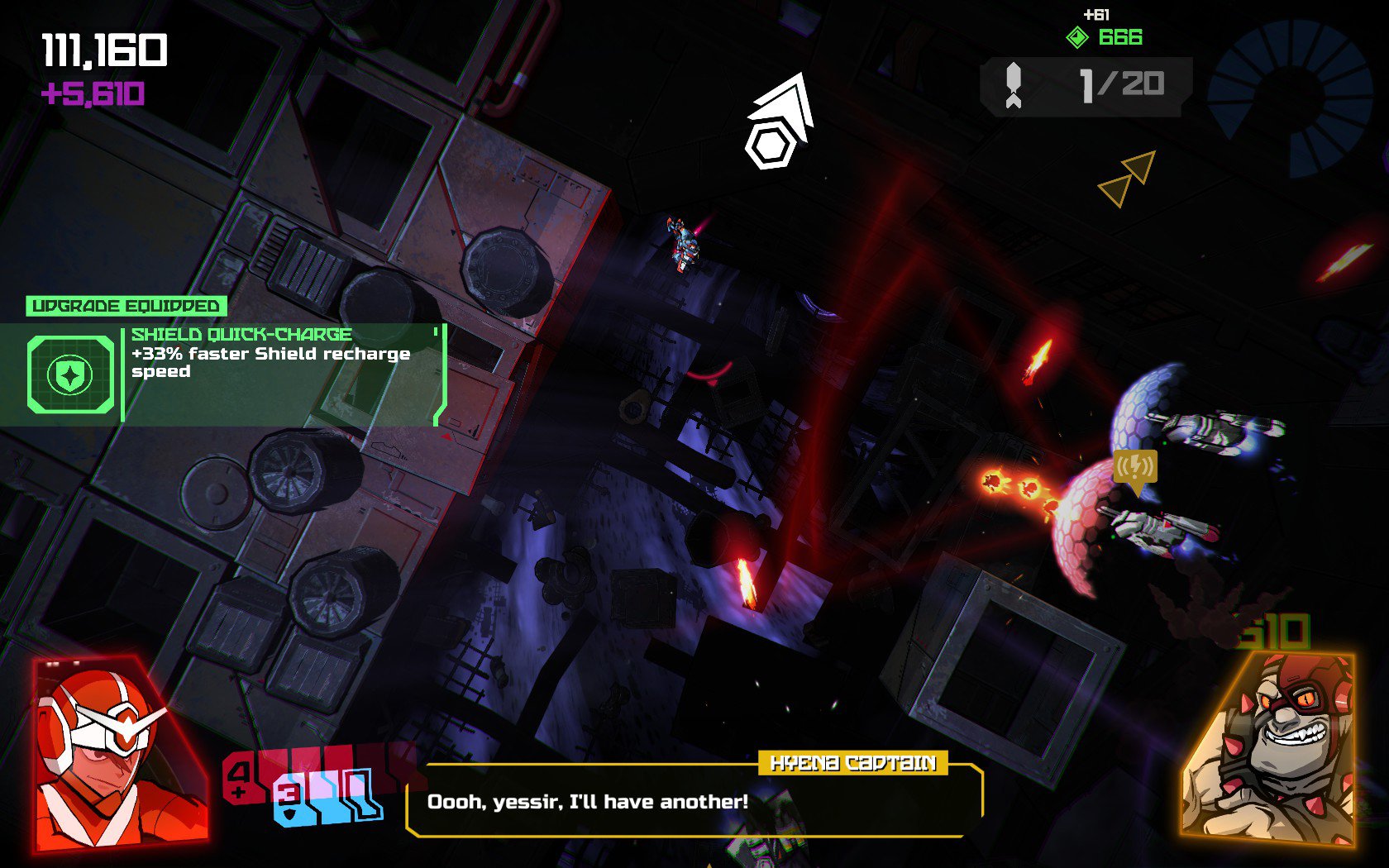 Setting a decent score may be more difficult to accomplish than you’d think. The Void is a merciless zone of death and chaos that has no interest in kid gloves or pulling its punches, instead immediately tossing players into the deep end. If you haven’t played in awhile, it might be wise to brush up on some early story mode content before hopping in.

Players start with a slightly upgraded ship and are dumped into one nail-biting combat scenario after another. It is a true test of all the skills you learn through the course of the main game. Galak-Z has always been a roguelike featuring randomized maps and enemy spawns, but The Void takes it to a whole new level. The whole bucket of enemy types, traps, and hazards are tipped over, letting it all spill right into the player’s lap. Heavy Hammerhead warships right off the bat? Sure. A narrow alley of clutter lined on each side with exploding canisters? Have fun. Super mechs backed up by nimble fighters patrolling dangerously close to a clutch of bugs? Why not? Expect to see every enemy type and trap in the most “screw you” configurations possible.

It’s not all bad news. Even in merciless black of parallel universes, there are still upgrades and power-ups to find. Assuming you survive to the end of the randomized level, you can spend your hard-won salvage on new weapons and upgrades just like the regular game (or, if you’re like me, waste your salvage on repairs to try and buy yourself a few extra seconds of longevity in the next zone). 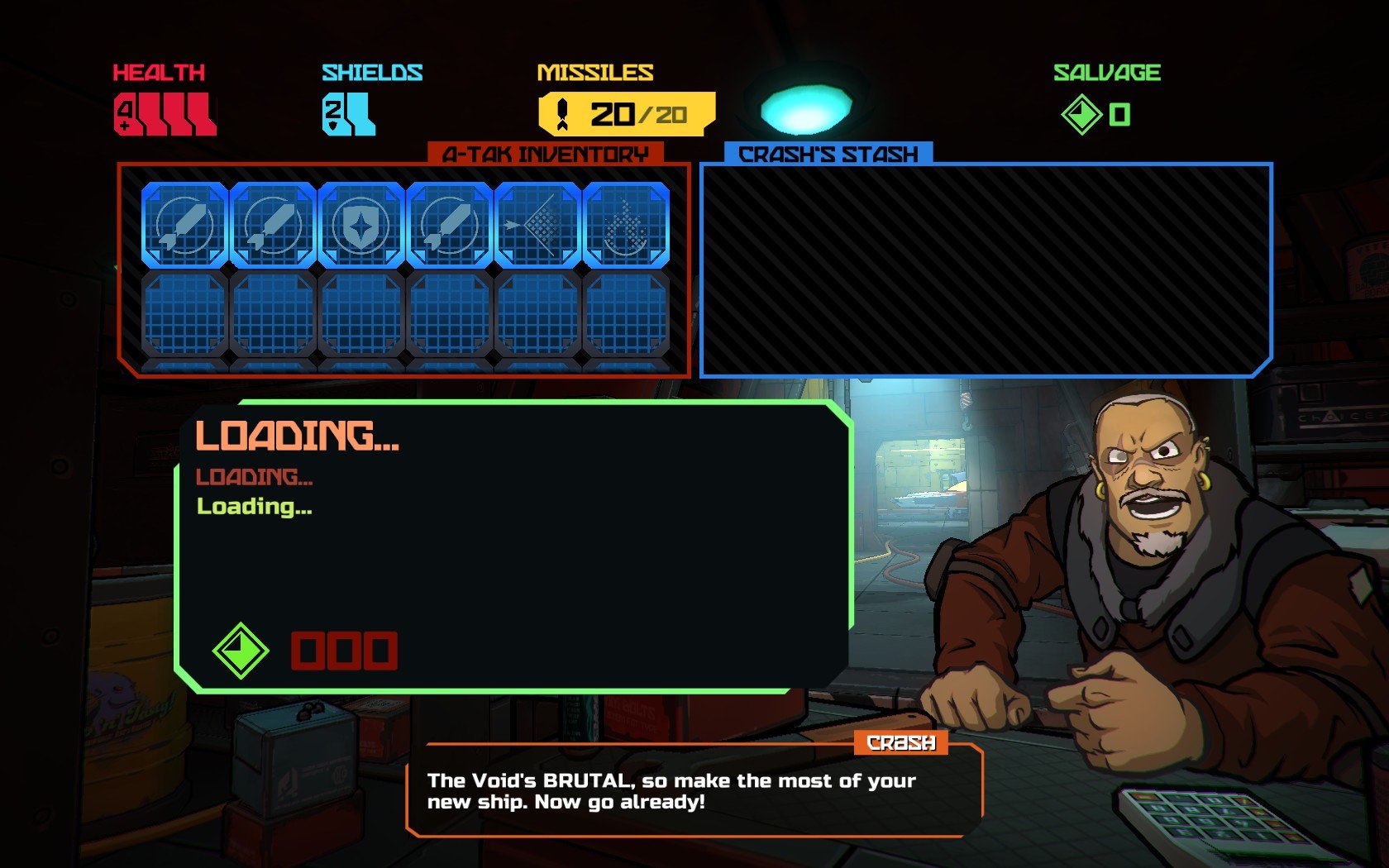 The Void itself is a swirling and confusing tear in space that is purposely disorienting. It’s oddly claustrophobic, with small exterior areas confined by space-walls that instantly drop your shields if you happen to skid up against one and narrow jumbled wrecks right out of Space Hulk to navigate through otherwise. The whole thing is slowly spinning at all times, adding to the disorientation and unease. Aesthetically, it’s amazing. As a gameplay experience, it’s a little much on top of all the other hazards and nastiness.

As well as the leaderboards, the update also features the typical Daily Challenge structure you may be familiar with from other roguelikes such as Nuclear Throne and The Binding of Isaac. In this mode, each player has one chance to set as high a score as possible with an identical load-out and map. Again, I’m sure there is an audience out there just dying for a challenge like this, but I’m having a hard time imagining the typical player getting too worked up over it.

PS4 players will be pleased to finally receive the Arcade Mode difficulty setting that PC players have been enjoying for months. Arcade Mode adds checkpoints to the beginning of every level, significantly taking the sting out of the previous permadeath setup that only offered checkpoints at the start of the different seasons. Given the time investment a typical season demands, this is sure to be welcomed by players who don’t want to flush entire evenings down the drain thanks to one mis-play. 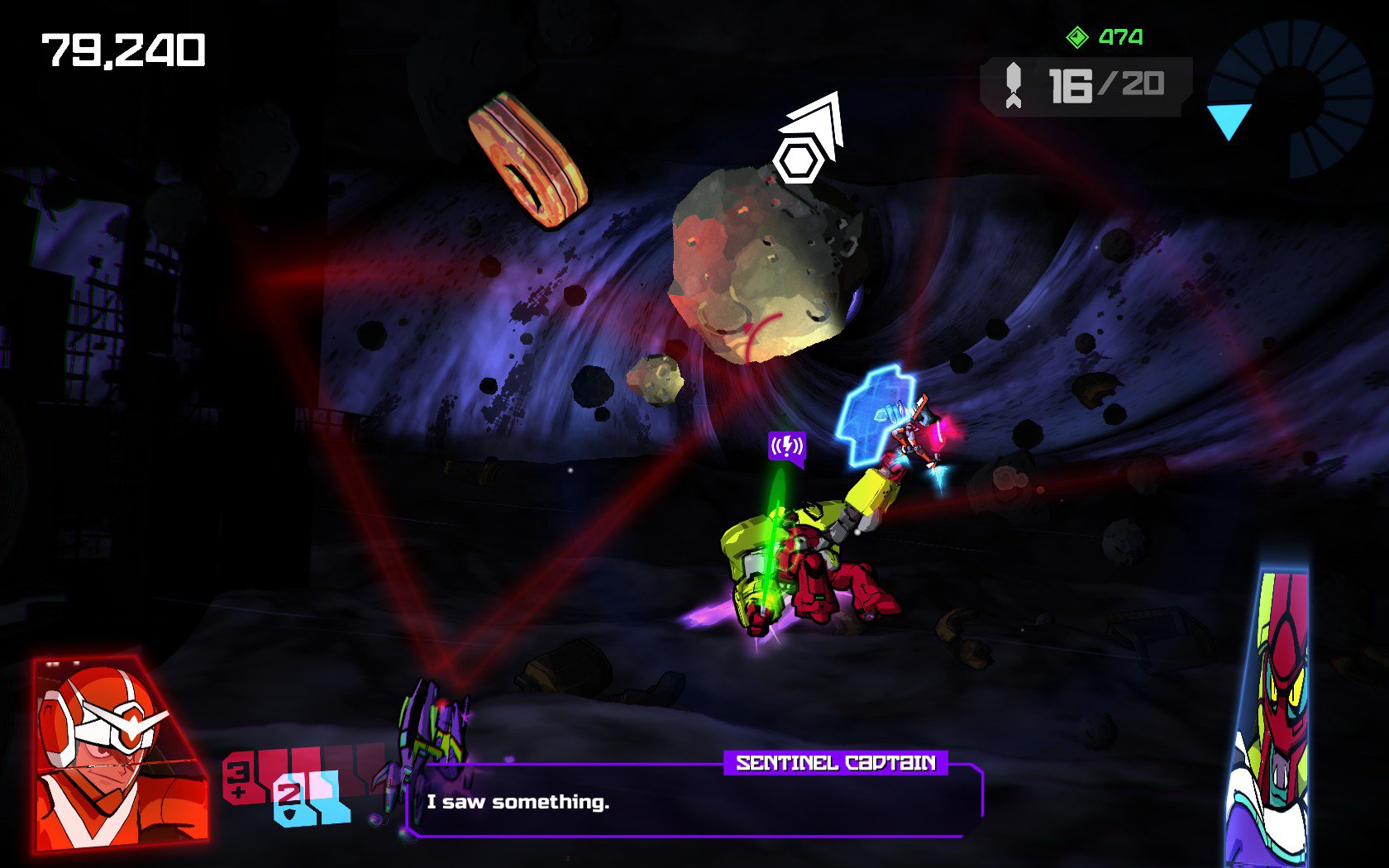 If The Void update came out as an addition to a fifth season or as a temporary holdover to give 17-Bit more time to work on the final chapter, it would be great. A nice little free mode patching in some of the features enjoyed in other roguelike games.

As a “substitute” for it, though, it feels like the third black king shuffled into the deck of an alleyway game of three-card Monte. You got fleeced, you know it, and the dealer smiling about it like he’s your buddy isn’t helping.

I have to imagine business reasons prevented 17-Bit from properly finishing the game (and yes, it does feel unfinished) and I’m sure the developers don’t like the situation either. But no amount of clicking heels together and saying “based on player feedback, based on player feedback, based on…” is going to make it true. Galak-Z is a great game, and The Void on its own is pretty cool, but this is a lame way to close the book on it.

The promise 17-Bit made at launch is null and void.