Arguably, there are three major elements to a BIT.TRIP game: classical gameplay elements evoking an earlier era of games, retro-inspired graphics that embody and celebrate constraints, and the music. Whenever I begin to describe a game like BIT.TRIP Beat or Core, I always have to mention how cool the music plays in the game. The BIT.TRIP games, after all, are just as much a rhythm/music game as they are a re-imagined take on Pong or Ikaruga or whatever.

So I wanted to ask the guys of Gaijin Games, when they make a game where music plays such an integral role in their games, how they go about making it work. It is actually a marginally convoluted process, but one that seems to come together in the end more than fine. So how does it happen?

Hit the jump to find out!

Well, the original plan for the BIT.TRIP games was to have to just make classic game homages of 2600 games. However, the team realized that that might not be a big enough hook, so they decided to bring musical elements into the games. Both engineer Chris Osborn and Creative Director Alex Neuse discovered a shared interest in chiptune music, so they decided to run in that direction.

Well, for the actual music of the games, you can thank a nameless fourth member of the team. The composer for all the music in the BIT.TRIP games (whom we like to refer to as Alan) actually cannot be named due to special circumstances. This is a drag considering so much of the game revolves around his own creations. However, it is easy to see that his role in the games are very important to making sure the games come together thematically.

It’s actually an interesting process. In his design document, Alex discusses the themes and feelings he wants the music to convey, whereupon our composer Alan creates tunes that fits those themes. For example, Core was a game with a more up-tempo rock feel, and a game like Void is a more minimalist electronica inspired work. Once the work comes back, the team listens to the song, teasing out elements that they like and elements that they don’t. 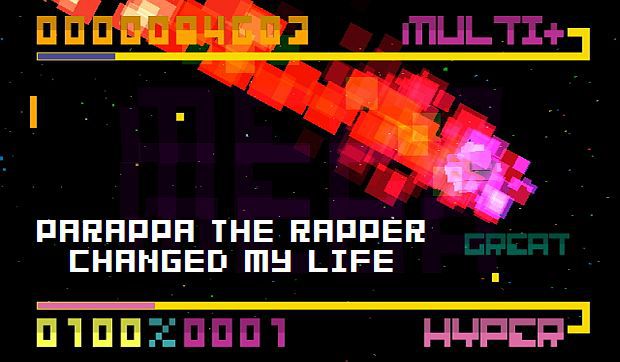 From this point, the composer makes some last changes and tweaks, and Chris gets started on implementing the technology behind the music of with the gameplay, Alex starts designing the patterns of the rushing dots, and art-man Mike Roush proceeds to create the artistic elements of the game. It’s a process that really comes together all at once, with the gameplay, the art and the music all entirely reliant on each other.

For example, Mike will sit down and listen to the completed soundtrack over and over again for hours a day as he creates the aesthetics of BIT.TRIP. Something like like the down-tempo music BIT.TRIP Void helped flesh out the ethereal nature of that game. For Alex, he takes the music and is able to create patters of “beats” that best fit the mood and nature of that portion of the song. It’s funny, but the size of the studio and the elements of the game fit perfectly together.

One more reason why music plays such an important role in their games is that the guys are really big fans of rhythm/music games, going to Anamanaguchi concerts in nearby San Francisco. I mean, Alex actually says that “PaRappa the Rapper changed my life.” Their list of inspired music games entail the slightly esoteric, with UmJammer Lammy, Rez, and Gitaroo Man standing proud as games worth emulating. Fans of Guitar Hero or Rock Band might be shocked to find that the team isn’t exactly the biggest fans of those sort of games.

“I don’t think they are actually innovative from a musical point of view,” says Chris. He argues that while they recreate the the experience of being a rock star, but that they don’t offer creative vision, just a recycling of songs. 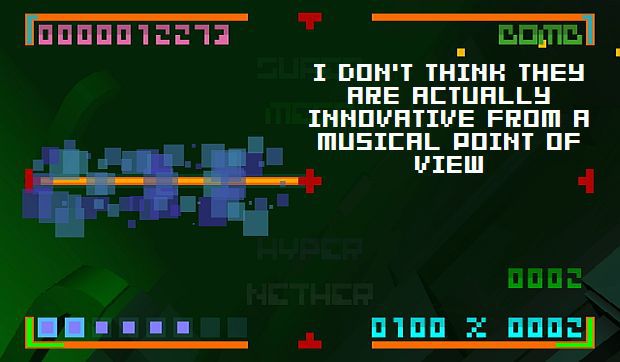 Part of this not so subtle snobbery is due to the fact that the team really respects music, and they really aim to make it more than an afterthought for gamers. When they see music as a slapdash creation tossed in weeks before a game goes gold, it offends them. Ultimately, it’s a matter of creating something that they can celebrate as artists, and they aim to make music a special part of their games.