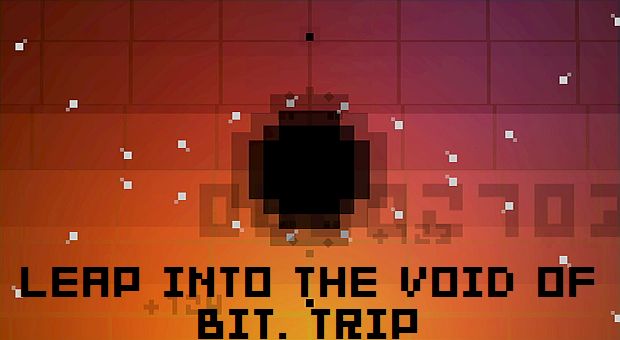 Gaijin Games and BIT.TRIP. It’s a dev team and a game series that has worked entirely within the the constraints of Nintendo’s WiiWare downloadable channel. For those who have given their previous experiences a chance, what they have found is something that takes practically ancient gameplay elements, fuses them with modern design elements and a wildly eclectic approach to music. Both BIT.TRIP Beat and BIT.TRIP Core have proven to be interesting, and fun games.

So where does this leave us? Well, I had the opportunity to go down to the Santa Cruz, California-based development studio where three guys have chosen to work on a 6-part, mini-epic, indie game series. What you will see over the next few days is the result of hours of conversation, hands-on gameplay with their latest game, BIT.TRIP Void, and some interesting views on the industry. What this represents is just one peak into the hidden, casual, day-to-day life of a game developers and the world that they embody.

Now, talking with our three developers, Alex Neuse, Chris Osborn, and Mike Roush, the obvious beginning would have to be with their most pressing of projects: BIT.TRIP Void. Coming out in just a few weeks, this third entry of the series represents the halfway point, the middle ground for the overall narrative for CommanderVideo, the protagonist of the BIT.TRIP series.

Wait, the protagonist? That’s right. For a series well known for simplicity and pure gameplay, there is an overall arching narrative spreading across the entirety of the BIT.TRIP series, and Void stands as the middle element of the overall “mini-epic” of BIT.TRIP. As such, Void acts as a sort of “calm before the storm” of the fourth, fifth, and sixth games in the series.

“It’s the palate cleanser of the series, it’s more relaxing” says lead designer of Gaijin Games, Alex Neuse. And palate cleanser is a good way to describe his goal, as Void is a very different game from the previous titles, Beat and Core.  Gaijin Games’ goal to make Void a kinder, gentler game can be summarized with one word: minimalism. Every element of this game, from the art, the music, all the way to the actual gameplay itself, exemplifies this tightly focused experience.

This all throws back, of course, to that narrative of CommanderVideo. Sure, the guys at Gaijin Games don’t really want to get too specific into the story, preferring gamers develop their own understanding of how the plot of BIT.TRIP unfolds, however, they will acknowledge that there is a story built in, one that oddly addresses human interaction. It’s a little hard to address in one article, but take it from these guys, most of the subtle elements of the game have meaning to this narrative.

This spartan approach to the story also applied to the actual creation process: “Do we need this or not? Can we take this out? What else can we take out,” according to Chris, was the course of action. Void originally had many elements that the team erased, such as a limit to the Void size. This black blob, which players control about to collect black “beats” while avoiding the white ones, will grow larger and larger with each beat until they either accidentally pick up a white beat or manually decrease in size with the press of a button.

Well, one of the original plans with the Void was to limit the size that players could grow to. This, according to Chris, would allow the team to be a little pickier about the “beat” patterns. However, a whole slew of new problems came up. The HUD became complicated, the scoring became overwrought, and the actual process of limiting players resulted in a less enjoyable game.

Even the actual coding became an exercise in “less is more”, as engineer Chris worked hard to limit the amount of code. The less code, after all, means fewer bugs in the game.

Another element that the team focused on was making the art even more minimalistic. Players of the previous BIT.TRIP games will remember vivid colors and a hectic, defined HUD. Void, with its slightly different focus is artistically driven by calmer things.  Mike says that they were “definitely inspired by sunsets and sunrises,” and gone are the polychromatic beats that assaulted gamers in the previous games. It’s all about black and white on a cool background of purples, blues and muted shades of orange. Even the HUD, which was very clear in previous games, is now nebulous and fluid, with numbers and figures moving in and out in a constantly shifting background. It makes for a less stressful experience, all the same.

And that’s what the guys aimed for, discovering that testers of the previous BIT.TRIP games found Void to be calmer and less daunting. Alex pointed out that “they kinda get quiet and they watch it, then they play it, and they get this grin on their face.” Formerly uninterested girlfriends, too, have shown Void to be attractive to a new group of gamers. Good or bad, Void aims to be a little bit friendlier to those less inclined toward old school brutality.

And don’t forget the music of BIT.TRIP. This also has gone through a change, as the team took steps to let gamers influence the music much more than previously BIT.TRIP games. Rather than following a defined musical path, gamers can control the rate they collect the musical beats, which creates their own rhythm and tempo to the music. It’s all designed to be musically attractive, but the overall musical goal is to make the player more in charge.

Talking with the team behind Void, it’s actually pretty interesting, as you can actually see how a development studio goes about creating a product. There’s a really evident evolution on these games and how they change from basic code to a cohesive experience. Keep an eye out for BIT.TRIP Void in releasing in the next few weeks on WiiWare for 600 points.