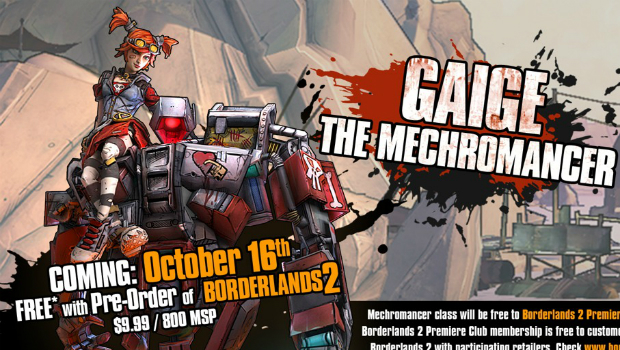 Even though it has been confirmed for months, I still think the idea of pre-ordering a game for future DLC can sometimes be fairly comical.

I was walking past my local GameStop when I saw a giant Borderlands 2 ad that instructed people to reserve the game, and get the Mechromancer class “at some point after launch.” I thought, “that sounds great — preorder and pay right now, and get the DLC later at some nebulous unconfirmed date.”

Well, as of today, you at least don’t have to worry about the lack of details, as we now know for sure that the Mechromancer (who is named Gaige) will be released on October 16th for $9.99/800 MSP. Previously, Gearbox told Polygon that the DLC should be out by October 16th, but now we have solid confirmation.

As a side note, you can also fool around with various skill trees for the four standard classes right now on Gearbox’s website. Just click on a character, then follow the skill tree link.

Oh, and before you even ask: dibs on Zer0!