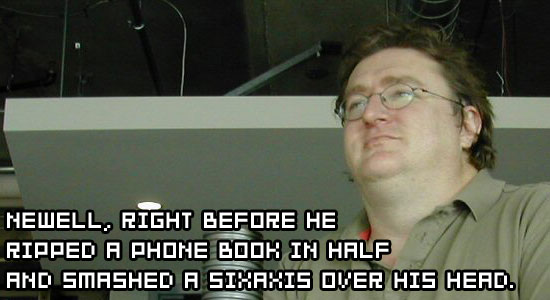 I’ve always been a fan of Valve. I just picked up The Orange Box for the Xbox 360 yesterday (after having to go to two GameStops, when one was actually *gasp* sold out), and boy … am I a fan of Valve. So by association, that spills over into a small man-crush on Valve’s Gabe Newell.

Sometimes, it’s funny when he talks, too. In a recent interview with Edge, Gabe bares his fangs towards the PlayStation 3, yet again:

Edge: A while ago you said that you thought Sony should do a ‘do-over’ with PS3. Do you still think that?

GN: Absolutely. I think [PS3 is] a waste of everybody’s time. Investing in the Cell, investing in the SPE gives you no long-term benefits. There’s nothing there that you’re going to apply to anything else. You’re not going to gain anything except a hatred of the architecture they’ve created. I don’t think they’re going to make money off their box. I don’t think it’s a good solution.

He goes into details about GPUs and CPUs and mentions freon at some point, but all of that stuff is over my head. I just like to play games, and The Orange Box is coming out on the PlayStation 3, right? Someone buy it; let’s make sure Valve aren’t wasting their time.