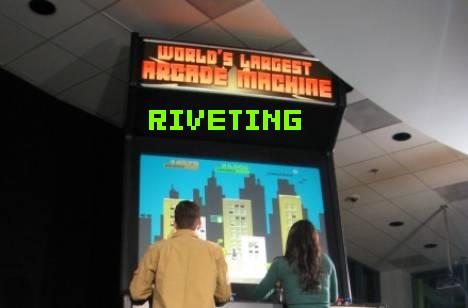 In what can only be described as a brilliant move, G4 announced today that they will be partnering with Microsoft to release several of their series via Xbox Live. The shows up for grabs are “Code Monkeys”, a show about coding that may or may not feature monkeys, “The Block”, which features people strapping themselves to wooden planks right before they fling themselves down a hill, and, of course, “Attack of the Show”. I’m not really sure what that last one is about.

In addition to releasing their content over Live, G4 will be releasing special weekly episodes created with Xbox fanboys in mind. The long, slow trek toward a widely accepted digital distribution method for most media is gathering steam, my friends. With more media outlets finally realizing the resource they have available to them in consoles, it won’t be long before gaming rigs become all-in-one entertainment systems. I, for one, can’t wait.

Full release after the jump.

Los Angeles, CA, May 27, 2008 – G4, the multi-media destination that feeds young guy’s addiction for the latest technology, web culture, animation and video games, announced today that the network has teamed up with Microsoft to offer a selection of its popular series on Xbox 360 video game and entertainment system.  Shows available for download immediately are animated comedy series “Code Monkeys,” including a free sneak preview of season two, snowboarder reality series “The Block” and a special weekly episode of “Attack of the Show.”  The agreement marks the first time that G4’s content has been made available for download on a gaming console.

“G4 is a natural fit to be part of the Xbox LIVE community.  Our young male audience spends more time interfacing with technology than any other network,” said Neal Tiles, President, G4.  “This partnership underscores G4’s commitment to bringing relevant and authentic content to young guys in more ways than ever before.”

“G4 is one of the industry leaders for gaming and entertainment content and we are thrilled to offer its shows on the Xbox LIVE Video Store,” said Ross Honey, senior director of the media and entertainment group, Microsoft. “We’re sure the Xbox LIVE community is going to jump at the chance to download G4 shows, especially the never before seen free episode of Code Monkeys.”

Episodes from the following G4 series are available for download now at the Xbox LIVE Video Store:

“Code Monkeys” – G4’s hit animated comedy of 8-bit proportions centers around GameAvision, a 1980’s videogame company, and the misadventures of its staff whose crazy antics ascend any of their own video creations.  Creator Adam de la Peña (“The Man Show,” “Crank Yankers”) sends the rowdy staff on side-splitting adventures that parody the golden age of videogames, including cameos of industry icons who help them along the way.  Season two of “Code Monkey” debuts June 1 on G4 but a new episode is available for download now at the Xbox LIVE Video Store.

“The Block” – This reality series, currently in its second season, gives viewers a free lift ticket inside the world of hard-core snowboarders.  The series is filmed at the world’s only hotels run by and for snowboarders and offers a candid look at the insanity of “The Block,” where the action behind the front desk is only topped by what happens on the slopes.  It’s up to the hotel’s owners, pro-snowboarding icon Marc Frank Montoya and hotel entrepreneur Liko Smith, to balance the company and the craziness to make sure guests live in true rock-star style.  Season one of the series takes place in Lake Tahoe and season two goes to the hotel’s branch in Big Bear, CA.

“Attack of the Show” – G4 brings viewers an irreverent interactive daily live trip to the digital water cooler with reports on the latest hot topics and breaking news, including non-mainstream guests and in-depth coverage of events such as CES, E3, GDC, SXSW and Comic-Con.  Hosted by Kevin Pereira and Olivia Munn, “Attack of the Show” takes viewers inside, underneath, around and behind tech, games, Internet culture, comic books, sports, gadgets and more.  A special weekly episode, created exclusively for Xbox users, will be made available for download each week.