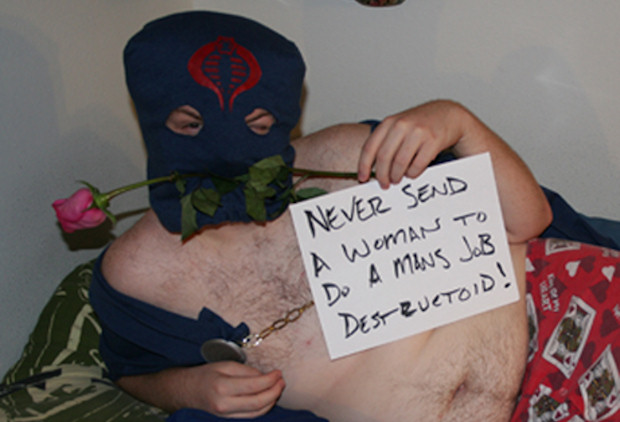 Apologies for the lateness of the results, but this has been one bitch of a contest to judge. The competition has been surprisingly stiff, with some of you guys going above and beyond the call of duty and dignity in an attempt to win an Xbox 360.

After much deliberation, I believe Wake Up Sammy deserves the grand prize. He scores points for the quality of the costume and the depths to which he sunk in order to get a laugh. As you can see from the header image (and that’s one of MANY photos he took), he was really prepared to put his self-respect on the line. He gets an Xbox 360, a copy of the G.I Joe game, and a figurine.

Our runner-up is Chack, who recreated the metal mask Cobra outfit in a most hilarious manner. He gets a figurine and assorted swag.

Finally, I want to give special credit to Super Drybones, who went so far as to mail threats to our head office, take a silly amount of photos, and spend much of his Destructoid time “in character,” as it were. Although he does not win an official prize, I am going to ask our contest department if there is some Dtoid-flavored goodies lying around the office that we can send him, just for being an awesome chap.

Winners, please PM me your shipping addresses via the Dtoid forums, and I’ll get those prizes shipped out. The rest of you, congratulate our Cobra Commanders. They really are quite amazing.