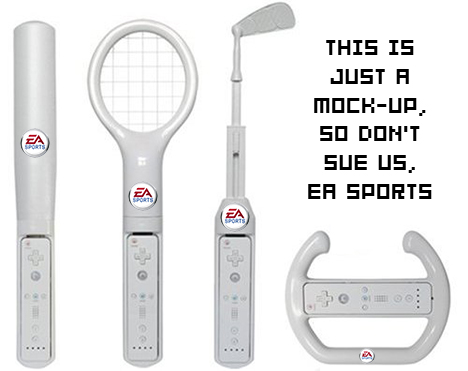 If you’re one of those people who always dreamed of playing NHL 08 with a hockey stick-like peripheral (à la these worthless Wiimote shells), you might not be waiting much longer. Gamasutra brings us the following intriguing tidbit from the Paris GDC: EA Sports VP David McCarthy gave a talk regarding efforts to produce more Wii titles, and in the post-lecture session, he revealed that EA Sports titles may begin shipping with bundled peripherals within the next year.

McCarthy didn’t divulge any further details, such as specific games or consoles, or what kinds of peripherals he meant. But he did reference the EA-published title Rock Band as a model that EA Sports will follow (in other words, we’ll probably see peripherals in the game box). However, he also noted that Rock Band serves as something of a cautionary tale; obviously, peripherals increase the cost of the overall package:

“You have to be careful with it, because Rock Band, that’s a great peripheral, but it’s a big expensive box.”

McCarthy said that the firm would put out a peripheral “provided it doesn’t raise that barrier of entry and accessibility” for the gamer.

However, he concluded: “I think you’ll see games using that Rock Band peripheral strategy from EA Sports, even within the next 12 months.”

Well, there you have it. Frankly, I’m perfectly comfortable playing Madden without a football-shaped piece of plastic — but then, I feel as if these peripheral-including games would be more geared towards the Wii.

[Via Gamasutra — thanks, Zulu!]