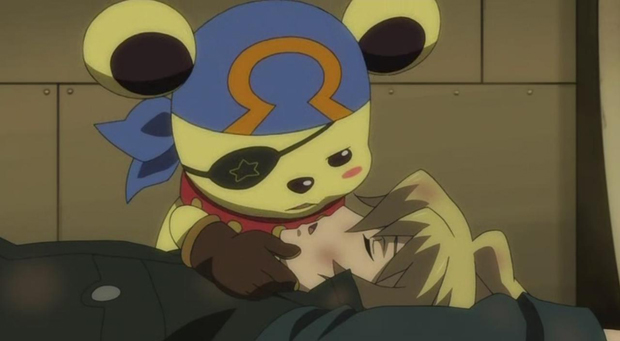 If the name Sands of Destruction sounds completely unfamiliar to you, that’s because Sega decided to rename the DS role-playing game World Destruction for its upcoming American release. I’m honestly not sure why Sega felt the need to change the name, though. Sure, the game’s setting contains a giant sand ocean, but the group of characters you control — the World Destruction Committee — is in fact trying to destroy the world.

Anyway, along with the name change, Sega brought word that Funimation will be handling the localization and distribution of the game’s similarly-named anime here in the US. I watched the 13 episode anime series when it came out in Japan last summer — through totally legal means … probably — and enjoyed it. The show wasn’t great, but it did entertain throughout, and it certainly turned out better than some other videogame-to-anime adaptations (*cough* Arc the Lad *cough* Star Ocean EX). It also has dancing cat people.

SEGA® Corporation announced that it has finalized a licensing partnership with Funimation Entertainment for rights to produce home entertainment, broadcast/digital content, and merchandise for the first season (13 episodes) of the Sands of Destruction fantasy adventure anime series. The anime series is based on the Sands of Destruction RPG video game from SEGA that will be available on Nintendo DS™ in January 2010.

Sands of Destruction the anime will be a fantasy adventure series directed by Shunsuke Tada and produced by Production IG best known for the Ghost in the Shell series. In Japan, the series is known as World Destruction: Sekai Bokumetsu no Rokunin™ and has received critical acclaim.

Sands of Destruction takes place on a planet where the oceans are made of sand and inhabitants must travel aboard huge sand ships. Constant battles rage between two organizations; humans and a dominant race of Therian beings. Therians are humanoid in appearance, but possess great physical strength and beast-like characteristics. Therians are able to use their fierce strength to force humans to live under their control. Kyrie, the hero of this story, lives a life of solitude. He wanders from place to place since having lost his parents as a child.  He is resigned to accept things as they are because he believes it is futile to try to change anything in the oppressive world he lives in; that is until Kyrie meets Morte, a mysterious girl who is a member of the “World Destruction Committee”. She is determined to destroy the planet, hoping to free it from the tyrannical rule of the Therians. After this chance encounter with Morte, Kyrie is dragged into a conflict that will dictate mankind’s future.

Featuring an all-star team of Japanese RPG developers and a sweeping soundtrack by composer Yasunori Mitsuda, Sands of Destruction the video game utilizes both the upper and lower Nintendo DS™  screens for its dynamic battle system, including major boss battles where colossal monsters take up both DS screens. Mixing traditional turn-based tactics with fighting game mechanics to create an intense gameplay experience, Sands of Destruction also features an innovative “Quip system” where characters chant inspiring battle commands that enhance abilities and boost attributes to give them various advantages during battle. As the story unfolds new battle commands will be discovered and gamers will be able to customize the different commands to each character.

FUNimation Entertainment will release the first season of the series in spring 2010.