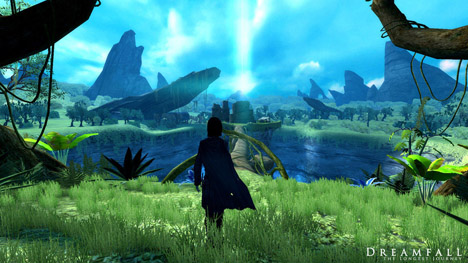 Sometimes, all a day needs to start off the right way is a good sequel to a good series, because let’s face it, sequels are all we’re bound to get in this day and age. Thursday’s winner and new inductee of the “Whoa, Seriously?” club is Funcom’s The Longest Journey saga, recently revisited with Dreamfall: The Longest Journey almost a year ago.

Norwegian site Dagbladet.no reports that Funcom will be receiving government funding to complete a new Longest Journey title, and that they plan to use some form of digital distribution (Steam or GameTap, mayhaps?) once it’s finished. In a bizarre twist, Funcom is also considering creating an MMO based on the franchise. This may sound about as wacky as a Myst MMO, but I suppose anything’s possible — an online Longest Journey title, of course, would likely come long after Funcom’s current MMO project, Age of Conan, finally wraps.

The Longest Journey and Dreamfall both enjoyed mobs of critical acclaim over the years for impressive visuals, incredible storytelling and (gasp!) competent voice-acting, so it’s likely that any new titles in the series would be held to the same standards of quality. One can hope, anyway — especially if you regard the Longest Journey series as dearly as I do. No release dates were mentioned, but how ’bout shooting for “soon”, Funcom? Some of us are ravenous for this crap.

Update!: Hit the jump for a full press release.

Durham, USA – March 1, 2007 – Funcom announces that the Norwegian Film Fund has awarded Funcom a grant which will partially finance research and initial development of ‘Dreamfall Chapters’. The grant enables Funcom to establish a core technology team which will research online-only delivery methods of episodic content, as well as lay the foundation for a later pre-production phase of ‘Dreamfall Chapters’.

The online-only business model is a natural evolution of Funcom’s strategy. Through the research Funcom also aims to find new ways of expanding the brand value of ‘The Longest Journey’, while reducing the chance of piracy. As Funcom seeks to further strengthen an already established IP, the potential for a future ‘The Longest Journey’ MMO increases.

“We will be researching an online-only continuation of the epic ‘Longest Journey’ saga, and we very much look forward to develop new chapters to the Dreamfall gaming community,” said Trond Arne Aas, CEO of Funcom. “To see the Norwegian government take such an active role in nurturing the local game development industry is impressive. In return for their trust we aim to deliver a modern adventure game with unique qualities.”

The grant is part of the Norwegian government’s active endorsement of the Norwegian game development industry. Since the inception of the program in 2004 the government has supported a wide range of games, including ‘Dreamfall: The Longest Journey’. Funcom naturally welcomes the continued cultural acceptance of computer games as a medium comparable to film and television. With the aid of the program fans can now look forward to new online chapters in one of the most popular adventure sagas of all time.

Each new installment of ‘Dreamfall Chapters’ will initially be delivered as online-only content, but there may be retail releases with combined chapters, both for console and PC, at a later stage.
Funcom will not release any additional information about ‘Dreamfall Chapters’ for the time being.

ABOUT “DREAMFALL CHAPTERS” – ‘Dreamfall Chapters’ begins right where the critically acclaimed and award-winning ‘Dreamfall: The Longest Journey’ ended, continuing the epic saga of the twin worlds of science and magic in a brand new format. Through thrilling episodes, players will embark on an amazing and exciting journey through worlds both familiar and fresh to meet fascinating and surprising characters, explore beautiful locations, experience a deep and intriguing storyline – described by critics as one of the best stories ever written for a game – and enjoy uniquely varied modern adventure gameplay in a whole new way. And at the end of the road waits the greatest mystery of them all – one that will bring the groundbreaking saga to a surprising and stunning conclusion.