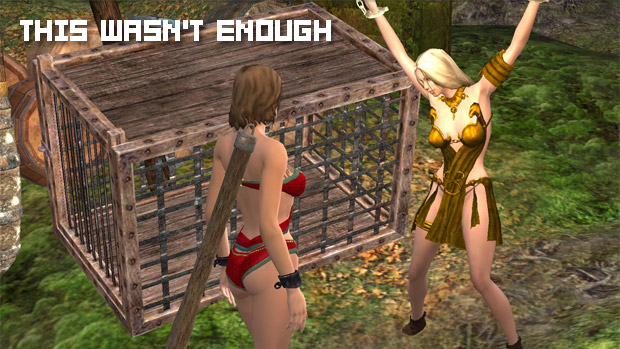 Desperate times call for desperate measures. Funcom is looking to gain more Age of Conan: Hyborian Adventures subscribers by offering crazy deals to anyone who’s played but has since stopped.

If you were at one point an active Age of Conan player, the studio is offering the chance to play again for two whole weeks at no charge. Also, during those two free weeks, you’ll get double the experience points.

Remember when I said they are practically giving the game away? I lied. They are giving it away. What’s more, Funcom has rewards for any old subscribers who want to get back into the action:

They really want you back, guys. Click through past the break to see the full press release for all of the intricacies.

Come back to Age of Conan, play for free, and level up twice as fast!

Durham, USA – November 11th, 2009 – Funcom has decided to repeat the successful re-evaluation campaign that went live earlier this year for the best-selling massively multiplayer online role-playing game ‘Age of Conan: Hyborian Adventures’.Previously active players are encouraged to come back to the game and play free of charge for two entire weeks. As an additional incentive for players to come back and play for free, they will also receive a double experience boost throughout their free period. Those who decide to continue playing beyond their free period can also look forward to fantastic rewards such as guaranteed access to the beta test for The Secret World, a free copy of the expansion and more.

“We are very proud of what have been able to do with the game since launch,” says Morten Larssen, Vice President of Sales and Marketing at Funcom. “The game has grown and improved at a remarkable pace, and we continue to introduce new content, new features and new improvements. We are introducing these fantastic rewards as we know that coming back to an MMO demands effort, and we want to make sure that as many former players as possible are exposed to the new and improved ‘Age of Conan’.”

Besides receiving an incredible experience boost throughout November, players who choose to continue subscribing to the game after their free period can look forward to a range of exclusive rewards: