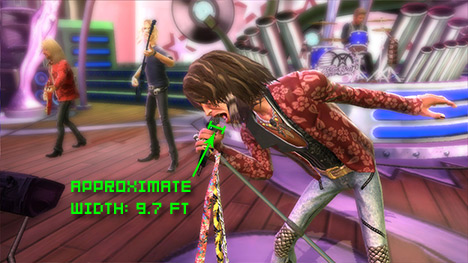 In addition to the hands-on preview that I did of Guitar Hero: Aerosmith, I posted a partial list of the songs that would be in the game — the 25 tunes that make up its first five tiers. Now, thanks to VideoGamesBlogger, we’ve got the whole megillah for you fine folks: all 41 songs that will be playable in Activision’s upcoming tribute to the best-selling band out of Boston.

The entire list, including the names of the venues and the tiers, can be found after the jump (it’s organized alphabetically by song title). There are six tiers in all, with five songs per tier save for the last one — it features as its sixth playable track a “Guitar Battle vs Joe Perry,” an original composition from the band’s lead guitarist. The ten bonus tracks comprise “The Vault”; all of them are either by Aerosmith or Joe Perry (he released a self-titled solo album in 2005).

VideoGamesBlogger was also nice enough to include links to YouTube videos for the songs when available, so you can at least find out what they sound like if you’re not familiar with them by name. Speaking of familiarity, when I showed the setlist to a friend who was on the fence about this game, he remarked, “A lot of notable singles were excluded.” What do you guys think?

Guitar Hero: Aerosmith will be out this Sunday, June 29th. If you’re thinking about buying it, hit up Hamza’s post for pricing details.

Tier 1: “Getting the Band Together” (Nipmuc High School)
1. “All the Young Dudes” by Mott the Hoople (cover)
2. “Draw the Line” by Aerosmith
3. “Dream Police” by Cheap Trick
4. “Make It” by Aerosmith (re-recorded)
5. “Uncle Salty” by Aerosmith