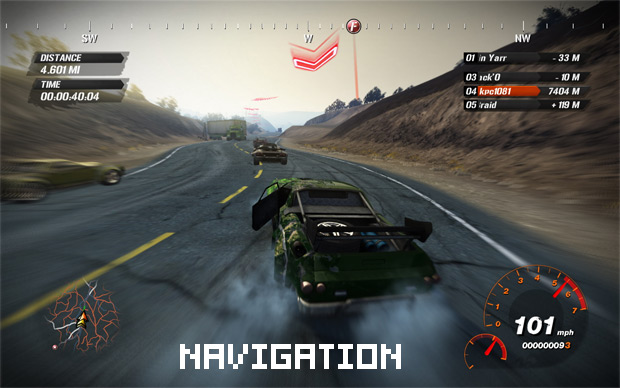 As you may or may not know, FUEL, Codemasters’ latest racer, contains a 5,000 square mile world for you to more or less do what you want in. One concern for such a massive, open landscape is that of navigation, but the latest trailer for the game is all about showing Codies’ solution.

FUEL‘s GPS, which is shown both above and in a video after the jump, is pretty crazy. See those big, borderline intrusive arrows? They dynamically guide you to the finish line, although as you’ve most likely witnessed in other sandbox-style games, it’s sometimes better to take sketchy shortcuts over the more standard routes.

And if the navigation system takes up too much screen real estate for your liking, you are covered on that front as well, since the GPS can be turned off for certain challenges. Personally, the less of a HUD there is, the better. If it were up to me, I’d make games necessary info similar to how Dead Space brilliantly did.

With a succession of flowing arrows, that guide gamers from checkpoint to chequered flag, FUEL’s elegant solution calculates routes dynamically and constantly updates according to vehicle position, in conjunction with a mini-map which pinpoints each racer’s location.

However in FUEL the suggested route is not always the quickest. As players master their vehicles they can take on riskier – and potentially more rewarding – shortcuts, veering off the suggested line. The GPS system can also be turned off for the ultimate man and machine versus Mother Nature challenge.

Gamers can view the video and find out more about FUEL by navigating their way to the newly launched, www.fuel-game.com. On the site, each of the game’s 19 regions can be explored across an interactive map that enables players to zoom in and out of the largest racing environment ever. Information on the multi-class vehicle roster, extensive online options and different events can all be accessed. Visitors can also download the latest screens and videos and register to have the latest FUEL news and updates sent directly to their in-boxes.

Coming this May, FUEL is the ultimate racing sandbox where players can race and explore a stunning world, mapped from satellite data of the United States, in a range of on and off-road, two and four wheeled vehicles. Set in an alternate present where the accelerated effects of global warming have driven people from their homes, the huge, abandoned areas become a playground for a new breed of extreme racers.

A full day/night cycle and dynamic weather effects including snowstorms, thunderstorms, blizzards, rainstorms and tornados brings this world alive. Players take on hundreds of race events in a wide range of customised vehicles, including quads, bikes, roadsters, trucks, dragsters and more, that all share rewarding and exhilarating arcade handling.

With extensive multiplayer options including 16 player multi-class racing, online free-ride and a powerful yet intuitive race editor to share races with friends, FUEL is set to revolutionise open world multi-terrain racing when it launches on Friday May 29th for the PLAYSTATION®3 computer entertainment system, Xbox 360® video game and entertainment system from Microsoft® and Games For Windows®. Get a FUEL injection by downloading the GPS video at www.fuel-game.com.