Gather that coal you bums

I’ve never been too fond of simulator games since I tend to ruin everyone’s virtual lives in The Sims, or set out to create death coasters in Roller Coaster Tycoon. God games never quite have enough of an emotional draw to keep me invested for more than an afternoon, so I’ll check out completely once I’ve pushed the game environment to its extremes. 11 bit studios’ Frostpunk aims to change that.

When the virtual environment is already dealing with extremes, Frostpunk asks whether or not you’ll get attached enough to care about the remnants of society. While I’m still not sure about that yet, what I did glean from my hands-off time with it at E3 was that I really dig the idea of a game letting me write all sorts of new child labor laws.

Set in the Victorian era — which is slowly becoming my new favorite time period — and inspired by the work of Charles Dickens, Frostpunk has players lead the last bastion of society after the world freezes over. Successfully forming a settlement around a heating generator in the middle of a crater and slowly evolving the society’s technologies and well-being are crucial to overall success. You’ll play the role of the leader of this little society and balance happiness with how far along your settlement is progressing. Balancing both a Hope and Discontent meter, as better surroundings raise hope and poor management skills raise discontent, it’ll be the player’s job to make the tough decisions.

In the demo, the 11 bit studios rep sent workers away from the warmth of the generator to gather more coal before the overall temperature of the world dropped the next few days. When that wasn’t enough, he put children to work because they were just bumming around doing nothing while the little society was freezing. Doing so drew the ire of a small sect that’ll always be around protesting your decisions. From then on, it’ll be the player’s decision to cater to their cries for human decency or to just do what you want. For the demo’s (and hilarity’s) sake, we put those damn kids to work. Welcome to the new ice age, kids. 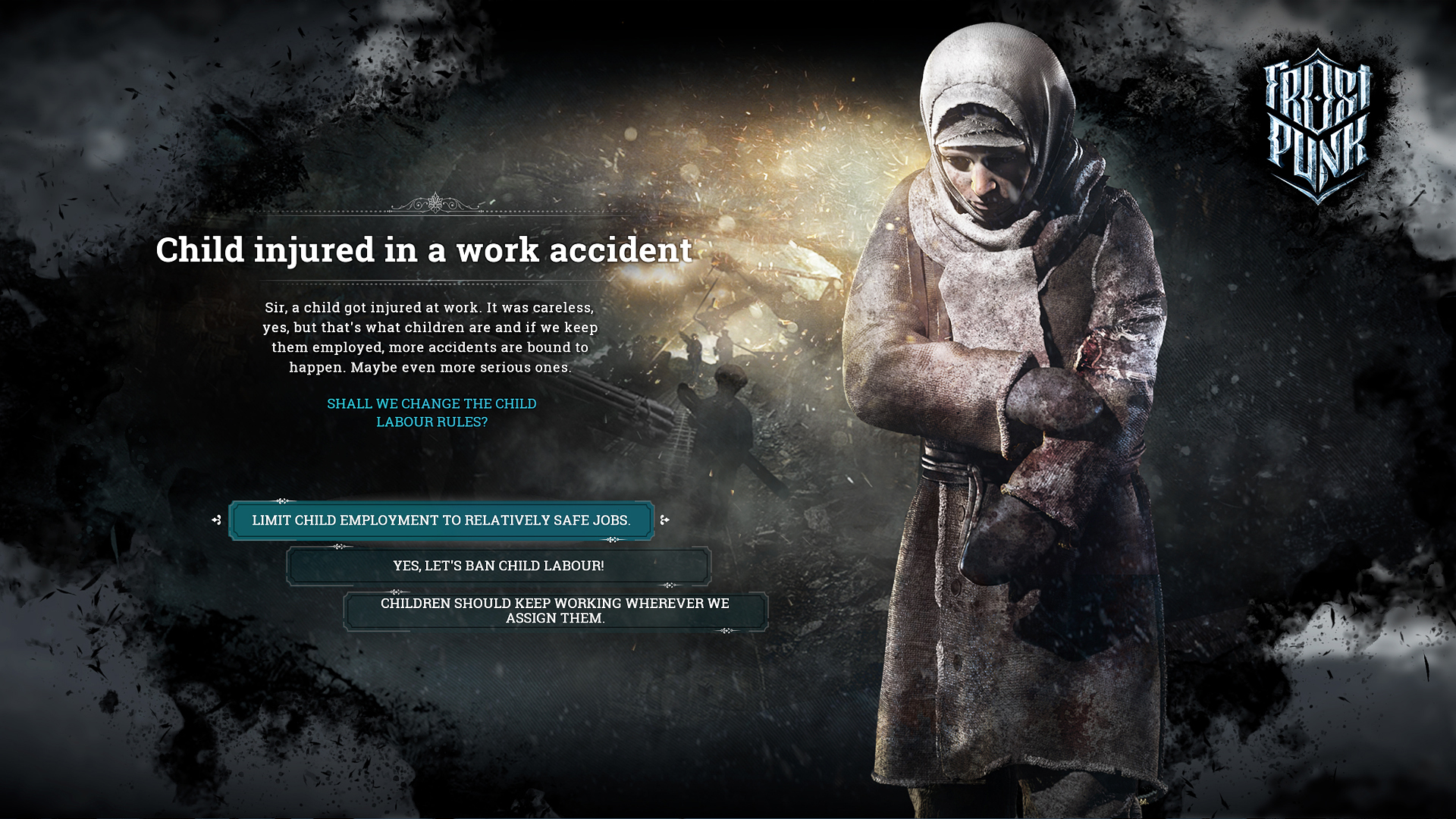 While managing supplies, time, and your settlement’s happiness are going to be important, the most interesting facet of Frostpunk (should it be implemented successfully in the full title) is The Book of Laws. The Book of Laws is a set of branching choices you’ll have to make, with certain choices raising Hope or Discontent. For example when we set those tiny handed bums to work, a law was set in place saying child labor was alright. When one of those kids got injured, a branching choice was whether or not to end child labor, enforce that labor, or just have them work safer jobs. 11 bit studios promises that not every decision will be so clear-cut and hopes players will spend some time really thinking about the grey morality of the Victorian era.

A better example of this was when a worker got frostbite. We built a hospital to aid our workers, but then a decision came up as to whether or not to devote the time and effort to save this one worker. It was either aid the ailing person who probably wasn’t going to survive, or keep focusing on generating heat as the temperature was about to become much harsher.

For demo purposes, the rep chose to help this worker and move along but in the back of my mind I couldn’t help but think I’d put him to work too. Since my condition has left me cold to their virtual pleas of mercy, I asked whether or not a full Discontent meter would have an effect on how fast my society would grow. Well, it’ll basically be a game over. While there will be opportunities to get the settlement’s faith in your leadership back, once the society has painted you as some kind of draconian overlord they’re not going to care so much about their own well-being and will just cease production. 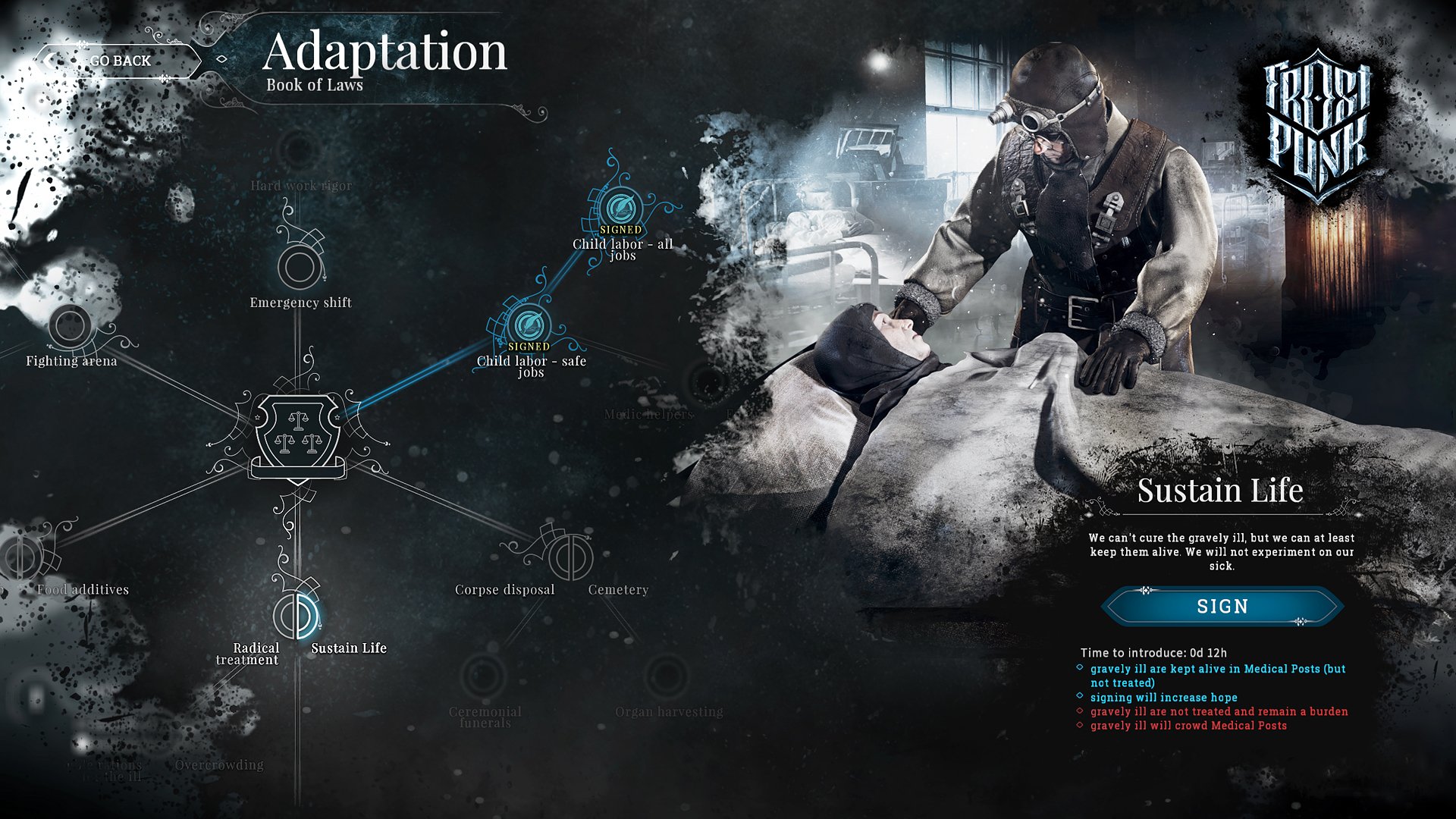 The thought of having to alter my decisions as a little virtual world adapts to my way of thinking really tickles that part of me that cares about things. What’s it called? Em-pa-thee? I’m pretty sure that’s it.

If Frostpunk can level out my virtual sociopathy, it’ll kick ice.