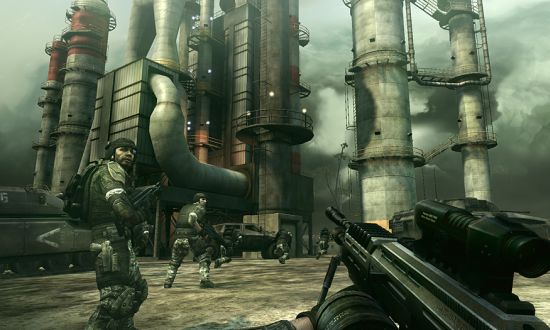 THQ is holding a really neat contest for their game Frontlines: Fuel of War that is set to come out some time next year (with a demo on the way next month for the Xbox 360). In order to win, you need to sign up at Frontlines’ Web site and search for ten hidden passwords. Winners will get a free copy of the game and chance to fly in a fighter plane. You can also invite friends to play and if one of them wins, so do you.

Admittedly, I have never heard of this game before until a few hours ago. The contest seems really cool but the game really creeps me out. It looks to be your standard future war shooter, but some of the promo videos on Frontlines’ site paints a disturbing picture. Gas is nearly gone, high energy consumption, the Avian flue, Depression, riots, war with Russia and China — Pretty much all the scary sh*t people worry about and what you hear on the daily news. There’s also some gameplay footage where you can watch the Army use RC Copters and RC Cars to blow stuff up with more video and screenshots at THQ’s site.

What do you all think about this game?