I still can’t believe this is being remastered

Metal Wolf Chaos is a wild video game, one that many of us have seen, but few have played.

It’s an extremely patriotic 21st-century tale about the President of the United States, Michael Wilson, fending off a military coup led by his treacherous VP, Richard Hawk. Both men pilot mechs with reckless abandon across the country, making convenient pit stops at popular landmarks along the way. (You better believe there’s a big-ass cannon situated on Alcatraz Island.) Eventually, their feud takes them up into space, because of course it does – that’s where mech-loving men go to settle their scores.

For better or worse, Metal Wolf Chaos hits a lot of the notes you’d expect from a 2004-as-heck original Xbox game. It’s often absurd and hilarious, never taking itself too seriously as an outside-looking-in interpretation of America. The upcoming PC, PS4, and Xbox One remaster – dubbed Metal Wolf Chaos XD by From Software and Devolver Digital – brings a new sheen, but not much else. The original design feels of its time. That said, there’s still genuine enjoyment to be had with Metal Wolf in 2019.

Earlier this month, I spoke with From Software producer Masanori Takeuchi about a bunch of topics, including remasters, virtual reality, and the potential for another Armored Core. Our E3 discussion also dipped into the creation of Metal Wolf Chaos and its unexpected revival for modern platforms.

I asked what it felt like to have fans latch onto an old game that never saw a localized release.

“I feel in two minds about it,” Takeuchi said through a (wonderful!) translator.

“First of all, just genuinely happy that people have really picked up on [Metal Wolf Chaos] and are looking forward to it despite it not being released overseas. But also we feel like we kind of let them down because we initially did aim to release it worldwide, and we couldn’t – at the time, things were difficult [after 9/11] – so we feel bad about letting them down back in the day.”

He also touched on the differences in how Japanese and American audiences view the game.

“It is America as perceived by the Japanese. It’s completely fictional, but at the time, it was our idea of this ideology of American culture and comic book heroes, and we pieced that together and it became the president piloting the mech. We think that when Japanese look at it that way, from the American point of view, it’s almost like how they imagine a Japanese ninja, and sort of the same ideologies, the same kind of fantasy, so it goes two ways.”

“Originally we had this dynamic between President Michael Wilson and Vice President Richard Hawk, and we wanted it to be this comic book hero dynamic of good versus evil. In terms of our initial image for Richard Hawk, we looked at WWF – the heroes and the antagonists there. The bad guys even have their own sense of justice and personality and they think they’re right and they’re very bombastic, and we wanted to base the character on that sort of idea.” 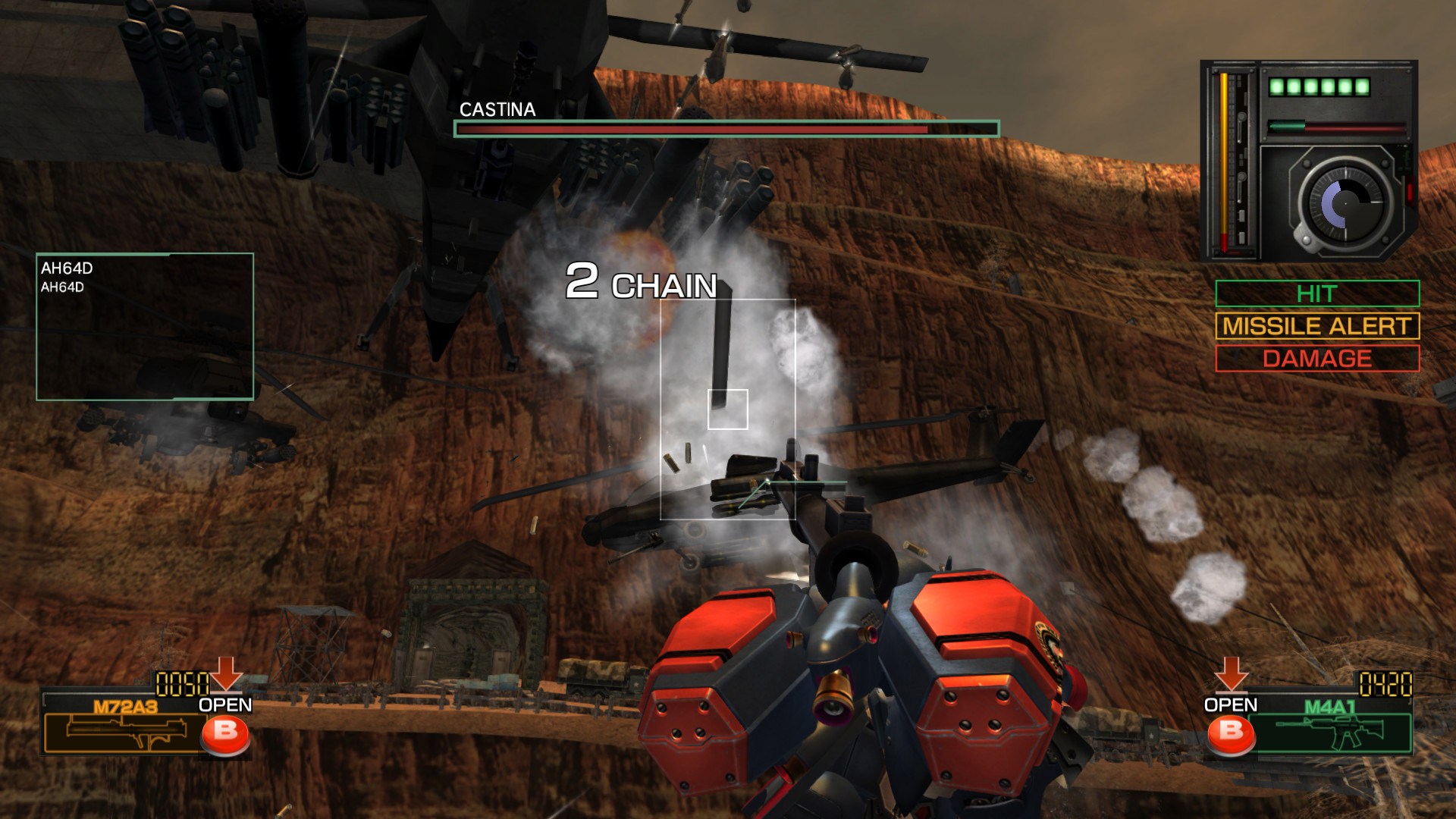 The original Metal Wolf Chaos was an unlikely partnership with Microsoft. On that front, I wondered which aspect came first: the basic mecha structure, or a story about a presidential protagonist.

“For the original Xbox, we were looking to make an exclusive game for [Microsoft] that for the first time in a while was really Xbox-centric and was very American,” he said. “That was the first avenue of thought: let’s make a game set in America. And then we decided we wanted it to be a mecha action game, and after that, the themes and the story fall into place, and it became the president.”

Though From Software was no stranger to mecha games at that point, interestingly enough, Metal Wolf Chaos didn’t come out of the Armored Core team. As Takeuchi explained, the developers took notes.

“It was actually a different team from the Armored Core guys, but we did receive some advice from them about how to go about making a different kind of mecha game. A little bit more action-based, a little more arcadey. So we took some advice and some reference from them in order to see how we might make that happen. In terms of reaction, it was quite fun because people knew what sort of game it was becoming, but they had no idea about the protagonist or the crazy story. We think they were pleasantly surprised. It was a nice harmony between the two teams.”

“At the time it was a team of 30 who made the original Metal Wolf Chaos in about 11 months, so it was very compact and short-term,” he continued. “Nowadays you might have people who are more specialist – someone who does the animation, someone who does texture.”

“We had to have someone doing a multitude of tasks. It’s not a case of which was better – the past or the present – but in those days, it maybe was easier to feel like you were all making a game together. It was easy to see who’s doing what and what’s happening at any given time.”

I’m super curious to see how Metal Wolf Chaos XD fares given that 1) From Software is a much bigger and better-known studio nowadays and 2) this is our first official chance to play the game outside of Japan. It’s taking longer than originally expected, but it’ll be out later this year on PC and consoles.