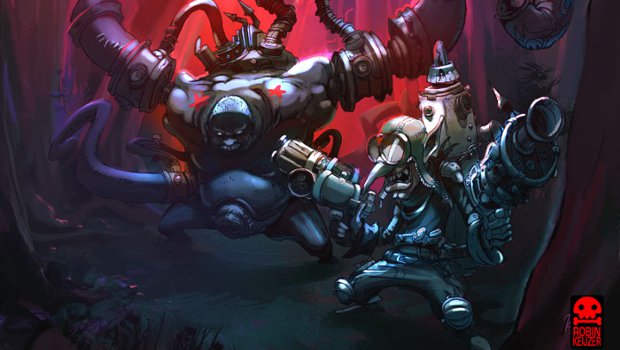 Odds are you’re not terribly familiar with Robin Keijzer, but we’d like to remedy that.

From 2005 to 2010, Keijzer held down an artistic role at Dutch developer Playlogic. His time there lead to 2007’s Xyanide Resurrection and 2008’s interactive screensaver, Tori-Emaki. Then there’s Fairytale Fights, a hyper-violent spin on classic fairytale tropes. The visual style and character design definitely took on a starring role in the cartoony hack-and-slasher with Keijzer at the studio’s artistic helm. After wrapping up Fairytale Fights and spending some time working DLC content, Keijzer made the decision to leave Playlogic to explore some of his own projects.

Keijzer primarily works on his comics and so far two books have been completed, ‘Treasure Hunt’ and ‘Splash VS Clean.’ A third project is currently in the works under the codename ‘Project X.’ The goal with ‘X,’ Keijzer says, is to “catch up and get some focus back into my art.”

Though comics are the focus, there is a game project being worked on in the background. Super Mighty Fortress (working title) is a collaboration with two other Fairytale Fights alums, coder Sjoerd Grevelink (“Super”) and designer Rob vand der Sloot (“Mighty”). Does that make Keijzer the “Fortress?” We’d like to think so. Super Mighty Fortress is an RTS/Tower defense where, Keijzer describes, “the goal is to build the biggest fortress ever.”

Keijzer’s work revolves around one concept that he refers to as the “weird battle,” but it didn’t start that way: “Ever since I played Double Dragon 2 and read ‘Battle Angel Alita’ I was hooked on battle scenes.” His infatuation with battles only increased as he absorbed the work of chief weird game designer Suda51, Chinese film director Stephen Chow, and web artists/animators Paul Robertson and Dan Paladin. As he puts it, “The weirder it became, the more I liked it.” We’ll just let his art do the rest of the talking.