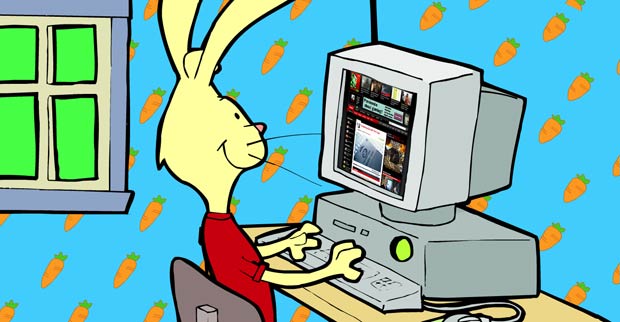 Hey, bunnies of the world. Today is Easter, your special day. Forget about Peeps, coloring eggs, and celebrating the resurrection of that bearded fellow. Today is all about you. Without you, who would deliver the basket full of green novelty grass-covered chocolate that children everywhere are most likely getting sick off of right now?

I bet you didn’t even know that you, my puffy-tailed friends, have even made quite the impression in videogames over the years. Yeah, that’s right: videogames — the things you can’t play because of your giant paws. Hey, don’t get mad at me! Get mad at the bearded guy I mentioned earlier. His dad is the one who gave me opposable thumbs!

Anyway … back to you. You know we all think you are cute, but videogames have not been helping. At the beginning, things were going great, but over the years your cute and cuddly image has tarnished a little.

But I am getting a little ahead of myself. Dust off that “World’s Best Quadruped” coffee mug that one of your 284 children got you last year, sit back, relax, and hit the jump for a list of your most memorable videogame roles over the years.

Bunnies in videogames couldn’t have started out any cuter! In Rabbit Transit for the Atari 2600, players control a small, helpless white rabbit (cute!) as he hops through a flower-filled meadow (CUTE!), avoiding things like snakes and butterflies (er, cute?).

Even cuter, if you successfully complete a level, an adorable cutscene shows the white rabbit main character reuniting with his fluffy family. All together now: Awwwww …

Cuddly or crazy? Cuddly. Not only does Reader Rabbit help kids learn … HE WEARS OVERALLS!

In Super Nintendo masterpiece (and my favorite game of all time!) The Legend of Zelda: A Link to the Past, if Link enters the forbidden Dark World without carrying the Moon Pearl, he is turned into a defenseless pink bunny. While in this state, all pink bunny Link can do is run around and talk with other confused Dark World mutants — no fighting is permitted!

Cuddly or crazy? A little bit of both. While there is no denying pink bunny Link is irresistibly cuddly, the muted and barren Dark World surroundings make everything the slightest bit crazy.

As Fox McCloud’s loyal ally, Peppy Hare makes sure the son of his missing best friend stays out of as much trouble as possible. In Star Fox for the Super Nintendo, Peppy provides helpful hints and advice during the game’s levels (“Do a barrel roll!”).

Cuddly or crazy? Peppy is too old to be cuddly and too friendly to be crazy. Since he chooses to put up with the obnoxious Slippy, though, my vote goes to crazy (sorry, Peppy!).

Like slimes in Dragon Quest and chocobos in Final Fantasy, rabites are staple creatures in the Mana series. They may have made their North American debut in the Game Boy game Final Fantasy Adventure, but the cute, lethal rabites are most remembered for their appearance in Super Nintendo classic Secret of Mana.

Cuddly or crazy? Aw, rabites are so cuddly. Look at their little ears, and the way they hop along their forest surroundings. They are … OMG IT IS EATING MY FACE! Crazy! Crazy! Not cuddly … CRAZY!

Based on a series of comic books, Sam & Max Hit the Road is regarded as one of the greatest and funniest graphic adventure games ever made. The game follows anthropomorphic detective Sam the dog and his partner Max the rabbit as they solve crimes and get involved in many wacky misadventures across the country.

Simply put, Max is hilarious and the perfect complement to Sam’s “straight man.” Almost every bit of dialogue that comes out of the crazy rabbit’s mouth is laugh-out-loud funny.

Cuddly or crazy? Certifiably crazy. And that’s why we love him.

Cliffy B of Gears of War fame created this sadly forgotten platform hopping character for a handful of successful PC games in the mid-‘90s. Not much needs to be said except Jazz is green, wears a bandana, and blows enemies away with an oversized laser gun.

Cuddly or crazy? Crazy … but, honestly, compared to his love interest (the annoying Eva Earlong), Jazz Jackrabbit is the most cuddly bunny ever!

Locked up and abandoned in the basement of Peach’s castle in Super Mario 64, MIPS hops around, sad and lonely, looking for any form of companionship. When Mario finally runs into him, the confused bunny just runs away. At least when MIPS is finally caught he rewards Mario with a helpful star.

Cuddly or crazy? Crazy. HE HAS NO ARMS!

In the cheesy, craptastic, awesome arcade fighting game Bloody Roar, various half-human, half-animal creatures called Zoanthropes battle to the death in a series of tournaments. One of the main characters, Alice, has the ability to turn into a giant white, albino rabbit and pummel people with her giant bunny paws. Amazing.

Cuddly or crazy? Cuddly one minute, crazy the next. Just like a real woman! (Kidding! I love you all!)

While most of Sonic’s “friends” are borderline obnoxious, Cream the Rabbit — first introduced as an unlockable character in Sonic Advance 2 — is one of the sweetest. It also helps that she doesn’t really fight — dictating the tough physical work to her pet Chao Cheese — giving her plenty of time to look pretty and not mess up her fashionable dress and matching shoes.

Cuddly of Crazy? Crazy. My God. So, so crazy.

So, as you can see, bunnies, it looks like most of your videogame appearances are of the crazy variety. But not to worry — we still love you. With the casual market taking over it is only a matter of time before Ubisoft releases the super adorable Bunniez for the DS or Hudson starts production on Pet! Pet! Pet! Cute! for WiiWare.

Before you know it, everything will be good once again.

Now, get back to your day of being pampered. You have lettuce to eat, eggs to hide, and baby rabbits to make! Happy Easter!