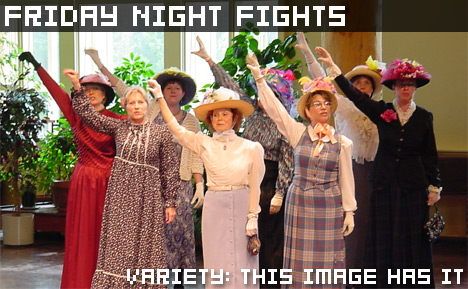 This week’s Friday Night Fights is going to be a crazy one. We have got a whole bunch of variety planned for you, and trust me, it’s going to be XTREME.

Wipeout HD came out very recently, so of course we’re going to be playing that. Don’t like Techno music? Well you would if you had robot ears!

Mixing it up on the PC side of FNF, there’s a Dtoid community server for The Ship that we know you won’t be able to resist joining. Yashoki’s got you covered as far as server info and the like are concerned.

As for Xbox 360 players, the line-up consists of Duke Nukem 3D, Rock Band 2, and more. But wait, what’s this … could it be? Yes, it is! I know it’s been a long time coming, but FNF is giving the Wii the love it deserves with Mario Kart.

Full details for all of tonight’s games can be found after the jump. Enjoy!

Mini-guide for meeting up with Dtoiders for Super Smash Bros. Brawl or Mario Kart:

The IRC way: head on over to this Web site (or start up your own IRC client) and type “/join #destructoid” without the quotation marks.

The Ventrilo way: download and install Vent, then use the following info to log onto Dtoid’s server:

The Xbox 360 way: use Xbox LIVE to chat with people on your friends list. Steam or an IM client will work fine too.

What’s this? Even more surprises? We’ve got a server for The Ship running!
Server: [Dtoid Community] Erimination Onry Prz
IP: 72.233.56.7:27017
Communication:  Ventrilo – VOICE-VA2.BRANZONE.COM:3790
Instructions: Pass for the Social Lounge is “ftw,” then go to The Ship channel

The following hosts are European, and may or may not still be hosting by the time you read this. Alternatively, if you want to get your gaming done earlier on (say 5:00 p.m. EDT), these are the people you’ll want to talk to.