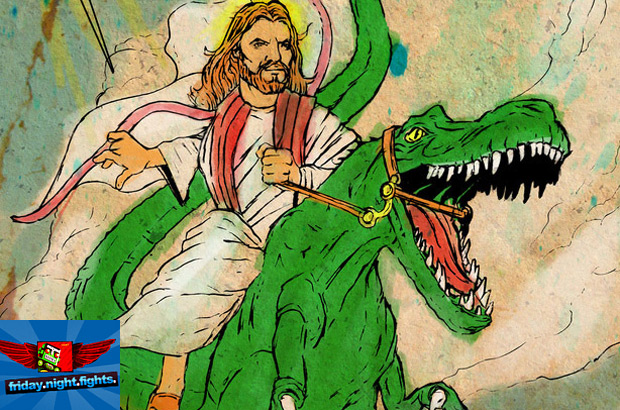 It’s been a tedious week for gaming news, and with today being Good Friday, things aren’t about to speed up any time soon. Because a greater portion of my time is spent talking about videogames than actually playing them, it’s pleasant to be able to clock out early and spend the rest of my day in a digital world.

It’s practically become tradition that when you post an image of Jesus on the Internet, it has to depict Christ as a raptor or a zombie, or somehow relate to either of those two themes.

I attempted to find an image in the former category that you hopefully haven’t seen before, which is why it doesn’t directly relate to Good Friday. It’s pretty damned glorious if I do say so myself.

Check after the break for this evening’s Friday Night Fights hosts. Reminder for FNF virgins: simply contact the host with a friendly message stating you’d like an invite to the room, and that’s basically it.