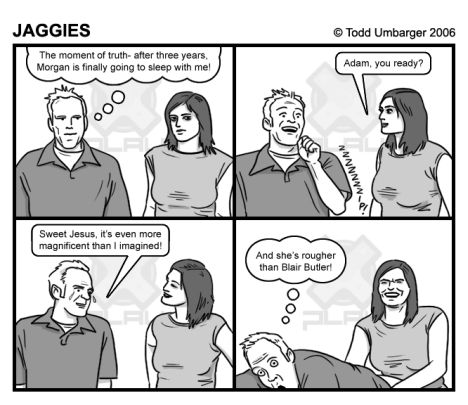 Another Destructoid feature?!?! Hell ya byatchs!

Each Friday, the staff of Destructoid will be spot lighting a different comic each week. This week, we’re bringing focus to Todd Umbarger’s Jaggies series. He’s been making comics since February with a very heavy political focus. He has recently started making a new series that focuses on video gaming called Jaggies. So far, everything he’s been bringing out gaming wise has been golden.

What really blew me away was when I saw the awesome mock up of the future Mr. and Mrs. Pitt. I had no clue that Todd was the mastermind behind it. I know it doesn’t have anything to do with gaming, but this mock up spread through out the Internet like a wild fire (I think I saw it on WWTDD recently too … plus it’s Angelina Jolie. If I ever have an opportunity to post her picture, I will).

Know of a gaming related comic that Destructoid should spotlight? Then send us a tip! The lesser known it is, the better.

(Morgan, if you see this and get offended, prove me wrong. Seriously, I want you to just prove me wrong. I hear you’ll be in Vegas next month. I’ll be there too so track me down baby.-CTZ)