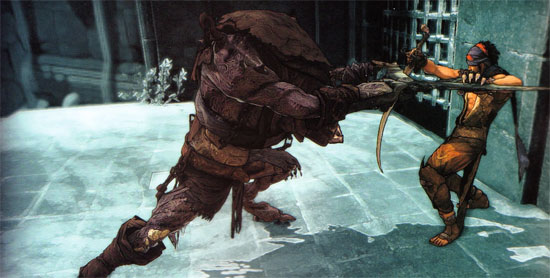 Ubisoft hinted at this in yesterday’s press release, mentioning the game’s “brand new illustrative style.” My French is rusty, but I think the text of the article is saying that the game’s story will involve the Prince releasing some evil from a box, which then corrupts a world that our hero must restore. Fans of time traveling may be disappointed, as that aspect has been removed from the forthcoming title; instead, Ubisoft Montreal will be placing a bigger emphasis on traversing an open world where multiple paths can be followed. The Prince also will wield some new weapons and gadgets, including a glove which he can use to slide along walls. (OK, I didn’t translate any of that … but a NeoGAF user did. Thanks!)

Those with keen memories will note that the Prince’s costume is spot on when compared to the concept art that was leaked “forever ago,” and that the game may or may not look like the alleged images leaked by Internet videogame rumor superstar, Surfer Girl.

Scans of the article can be found over at the blog Two Brothers and a Sister, which is not an amateur adult Web site, as the name might imply.