[Keep writing your Digital Distribution blogs for this week’s Bloggers Wanted topic — you can still write them all the way up until the new topic is posted next Monday. While you’re working on those, I’m still promoting blogs from last week’s topic on freedom. Today, Telephis discusses the physical borders and boundaries in game worlds. Want to see your own blog on the front page? Write a blog about Digital Distribution, and it just might get promoted next week! — JRo]

Invisible walls are something every gamer is familiar with. Beautiful vistas can often be misleading due to forced enclosures. Nothing limits freedom more than being shown an area or point of interest, only to have the game physically push you back from it.

Anyone who has ever used noclip knows that they are placed because, simply, they need to be there. If a player goes beyond the confines of the play area, they are met with horrible looking renders and see-through maps. It’s like when your favourite fem-bot gets chipped, and you can see the steel skeleton and wires underneath the sexy female exterior. You know what I’m talking about. Not something you want to see. It reminds you that you are playing around in a computer simulation prone to errors, and not a fantasy medieval fairy land of magical wonder. Of course, if you are cheating in the first place, that removes you a bit from it already, but glitches have been known to occur where innocent players ‘fall through the world’. It’s probably more common than you think.

How do you present the game world as a massive expansion of territory, as far as the eye (camera) can see? This certainly is a game design challenge not to be taken lightly. Invisible walls, then, are the easy way out. If I am on a beach, and I can look out into the water to the horizon, and then providing water doesn’t kill me, I should be able to swim as far as I want to. That is, without an artificial barrier in the form of an invisible wall. Most players who would swim out into nothingness instead of pressing on in their quest do so for one reason – to see what will happen. Will I discover a new area, perhaps an island? What distance can I swim out to? Better check.

A big part of freedom is about exploration, and testing limits. Obviously, there have to be limits, like not being able to go in 99% of buildings in the GTA series. Whether it would be just too much work for the devs, or not make sense in the context of the narrative, restrictive player placement is just part of the game. What is unrestrictive, however, is the method of confinement. Invisible walls, to me, scream lazy, and takes away from the game world I am in. In some cases it would be very easy to add a barrier that makes sense and is effective while not breaking immersion.

Who remembers Snacker the shark from Banjo-Kazooie? Talk about effective. And terrifying. Every time you go in the water, that ominous music begins and you know, soon, Snacker will be upon you. I was never scared of horror movies when I was younger, but boy was I scared of Snacker. Even if there were invisible walls way off-shore, I would never know, because this shark was super effective and not letting me near them. In fact, I spent as little time in the water as I could. Not only did it make sense for there to be a shark in the water that would chomp your little bear legs off, it was a much more interactive and fun way to keep players confined, and added a whole new element to that gem of a level, Treasure Trove Cove (remember the music in that game? Golden.). 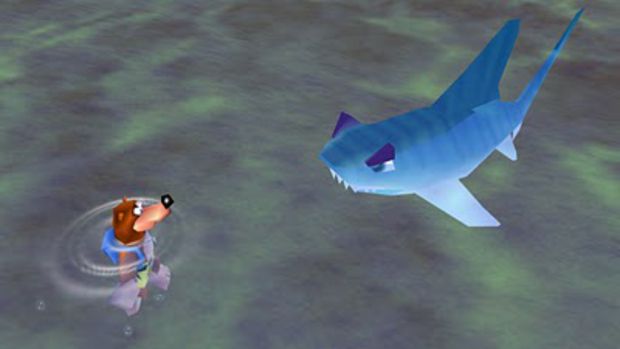 Swimming out to sea? Yeah, right.

Barriers can be non-interactive as well. World of Warcraft comes to mind, maybe because I spent many years sucked into its world and many of those hours (days?) were spent trying to get to places I shouldn’t have been, like getting to the Ironforge airport in vanilla WoW. Most of the invisible wall type blockades are in the form of impassable mountain ranges, which are not only effective but look damn cool. The zones in WoW, no matter what you think of the game, are superbly designed in that you are free and encouraged to explore, with small rewards (cool scenery, hidden NPC’s) in hard to reach areas. You never feel confined, although it is very clear where you can and can not travel. Cliff too steep to get to that hut? Find another way around – chances are, there is one.

Some games tackle this with timed out-of-area deaths. I have been playing some Battlefield 1943 recently and it is implemented here, as evident when you try to fly a plane to the mainland. Pro tip – doesn’t work. You are labelled as a deserter / coward and a timer appears, if you do not turn back before it gets to zero, you die. This is effective in keeping players and the action where it is supposed to be, but what makes you die or explode if you are in a plane? It would feel a lot more free if there were anti-aircraft turrets or the like lining the play area. Instead of ‘YOU CAN’T!’, it turns into ‘Sure, you CAN, but why?’.

Novel ways of obstruction are almost a reward for trying to push your freedom as a player to its limits. When it comes down to it, you are doing something you are not ‘supposed’ to do by trying to leave where you are not meant to leave. When you hit an invisible wall, it feels like a punishment. Nothing cool happens, you can’t explore further, and no explanation is offered. Some developers add a short fence with their wall, but in games where you can clearly jump much higher than the fence it is almost like an insult to the player character. I know I have spent many minutes trying to jump over fences or other barriers only to realize, even though I am jumping 5 feet over the top, it absolutely will not let me that way.

The opposite is when something does happen, as in the examples previously mentioned. They feel like a reward, put in by clever devs. ‘A-ha’, they are telling you, ‘We knew you would want to go this way – we don’t blame you! Alas, you can’t right now, and here is why’. The reward feeling comes down to the most basic cause and effect incentive system for game players – what happens if I do this? Oh, cool! Is it fun to spend 10 minutes swimming out to the horizon to be stuck against a wall in the middle of it, like Jim Carrey in The Truman Show? No. Is it fun to meet a creative barrier out there, such as a massive shark (or a disembodied voice telling you that you are being watched and protected in the confines of the area)? Definitely yes, as it seems like those things are put in just for you, the intrepid explorer and boundary pusher extraordinaire.