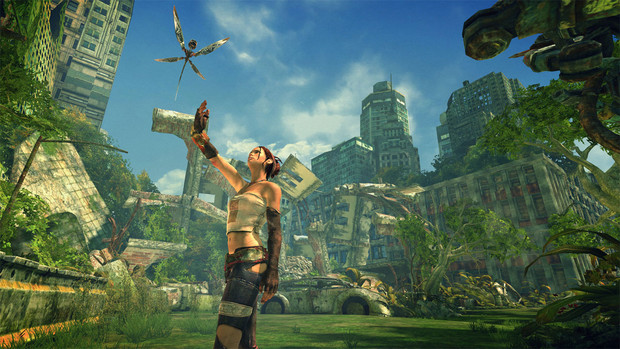 [While you all work on your Digital Distribution blogs for this week’s Bloggers Wanted topic, I’ll be promoting some of my favorite blogs from last week’s assignment. Today’s promoted blog is from fulldamage, and he’ll be talking to you about the theme of freedom, or lack thereof, in Enslaved. Want to see your own blog on the front page? Write a blog about Digital Distribution, and it just might get promoted next week! — JRo]

Did you know that Enslaved is, before anything else, a game about relationships? In the interest of maintaining a good relationship between myself and the reader, I’ll put the SPOILER ALERT notice right here. If you haven’t played it yet, you should – but I’ll only describe a few simple, early plot events. I finished Enslaved this 4th of July week, and discovered that it was incredibly appropriate, as Enslaved deals with the themes surrounding personal freedom.

To begin with, Monkey, your gruff bruiser of a protagonist, has been in fact enslaved by his sidekick character, Trip. Trip is in good shape, but she’s not a fighter at all – she’s a techie, excellent at figuring out computer systems but lacking any combat ability. To compensate for that lack of ability, in the wake of a disastrous transport crash, she has fitted Monkey with a slavers’ control headband. If Trip dies, or gets separated from Monkey by too great a distance, then Monkey dies. 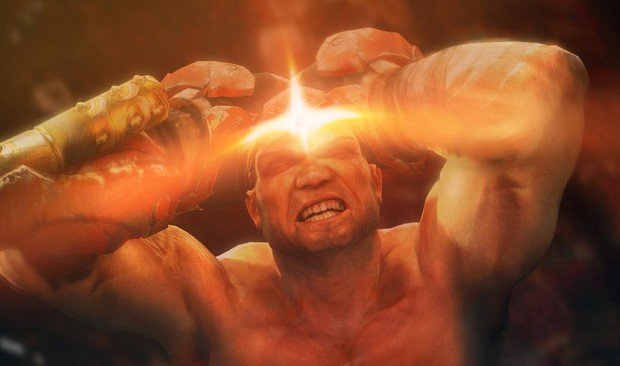 The fact that wandering off too far can lead to insta-death, combined with the fact that Trip will yell commands at you if you go too far, can make for some truly rage-inducing moments. Bluntly, being a slave sucks. Now, mechanically, this is really no different than putting up invisible walls in places you’re not meant to go, or sealing off doors behind you as you pass. But what I love is that, through the narrative, they direct your attention to these limitations, and create a reason for them. Thus, something that was previously a simple limit on your freedom, now becomes a story-telling device. You COULD go out and explore this gorgeous post-apocalyptic city-jungle, if not for this damned death-headband. And the scheming ho-bag who made you wear it. Malarky!

The main characters’ relationship is not a one-way street, either. In one of the earliest encounters in the game, Monkey and Trip stumble by accident into a small force of enemy mechs. The first one to awaken immediately begins spraying the area with gunfire. Monkey yells at Trip to move to a safer position, only to find that, infuriatingly, she won’t respond. She’s terrified by the gunfire, and is huddling in a motionless ball behind a low concrete divider, petrified. As Monkey, you’re forced to charge into the fray and hope you don’t get flanked.

When the encounter is over, Monkey screams at Trip that, in life-or-death situations, she needs to act on instructions immediately if the two of them are to survive. Humbled, she nods, agreeing in monosyllables. It is in this way that the game introduces the Command Wheel, the interface through which you can get Trip to perform actions, move to locations, and upgrade Monkey’s gear. It’s slick, the way they punctuate the introduction of a gameplay mechanic with a point of high emotional impact in the story. And by occasionally switching up the role of “command-giver,” Enslaved begins the process of blurring the line between slave and master.

The game becomes a partnership, in which you’ll find yourself trading roles and working together to get out of danger – and as you do, you begin to look towards what your partner helps you do, rather than what they stop you from doing. You follow her instructions, and she follows yours. It’s a perverse and amazing gameplay accomplishment that neatly solves the whole “crippled” feeling that you get from doing “escort missions” in other games. Every five minutes, you’re helping Trip to scale an out-of-reach ladder or pushing aside something that’s too heavy for her to lift – immersing yourself in the bodyguard role, and subconsciously buying into it a little bit more with each button press. And nearly as often, she’s scanning the environment, getting you access to places you couldn’t otherwise enter – holding up her end of the deal, in other words. So when she gets in trouble, you really DO want to rush to her aid – and not because of the headband. 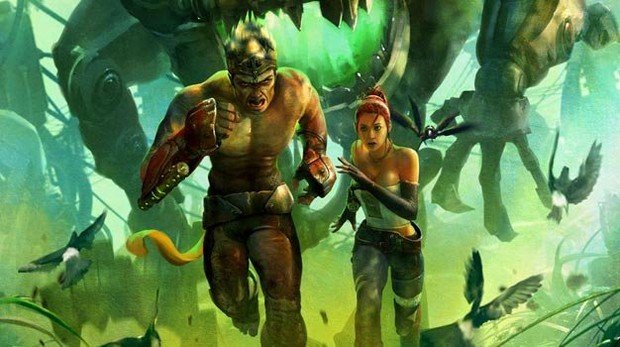 Ostensibly, Trip needs the headband to control Monkey because their relationship is unequal – he can survive on his own, and she can’t. At the very beginning of the game, that seems true. But over the course of the adventure, as you work together more frequently and survive more challenges, you learn that they function more effectively as a team – and between the lines, you can watch Monkey begin to struggle with the awareness that maybe, without Trip, life is less worth living. The headband stays on for the duration of the adventure – but not for the reasons you might expect. By the end of the game, you’ve been brought time and time again to examine the notion that, really, you can’t get through life without being in service to SOMEthing – whether it’s home, family, employers, dreams, lovers, you name it. It’s more a matter of picking the right master.