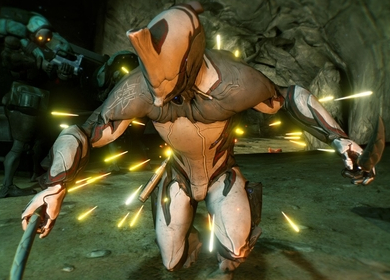 War has framed. Or something. Man, these names are stupid. Fine. At least this one has character designs that look like aquatic Evangelion monsters. Warframe, from Digital Extremes (The Darkness II, Star Trek: The Video Game), is a free-to-play third-person shooter that entered open beta a few months ago. According to IGN, the game will also be launching with the PS4.

I like this news for a lot of reasons. This move is consistent with Sony’s latest efforts to bring all types of experiences to its consoles. The free-to-play Dust 514 is already available on PS3. Digital Extreme’s Steve Sinclair, speaking to IGN, paints a picture of a very positive working relationship with Sony, noting how they don’t “have to necessarily get into bed with a publisher and sell away our ideas and kind of lose our creative vision for the game,” and praising Sony for “their attitude, their support and their willingness to work with us to get on the console.”

Having a seemingly high quality free-to-play game available at a console’s launch seems rather clever. It theoretically gives buyers another reason to keep playing their new console without having to invest in extra software, which could be appealing. Most importantly, though, Sinclair’s comments are two more chucked upon the heap of praise developers (particularly indies) have been singing towards Sony as of late, which can only mean more and better games.