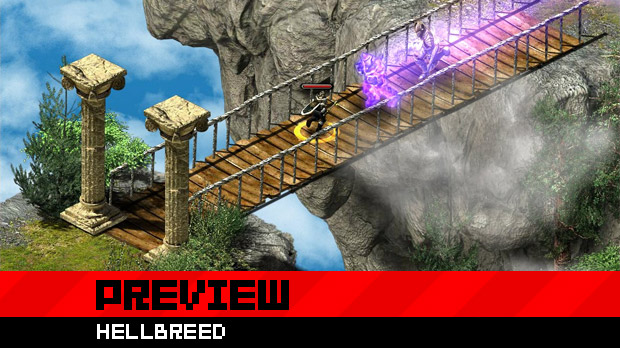 Hellbreed, which is being released today, is about a splintered world where you and a party of up to three friends need to gather together and assemble it using skills of magic, might, and mayhem.

For anyone who has been looking for an experience that can at times resemble games in the spirit of Baldur’s Gate, this will be your chance to hack and slash goblins, dragons, and werewolves all in the course of your lunch break.

As the story tends to go in games of fantasy, there is a great evil in the world. In this case, it is an evil warlord named Darken who — with his team of minions — is trying to destroy the world. The gods in this world saw him coming with his hordes and fragmented the world so that it would be more difficult for him to control everything and that is where you and your friends come in. Your goal is to reunite the fragments of the world and locate the mystical fountain that will destroy Darken and his army of darkness. With the help of others in this game, it can still be quite a challenge, albeit a rewarding one.

There are three types of warriors that you can choose from in the game. There is the Seige Master who is skilled at using all things mechanical like crossbows and ranged weapons. One of his abilities is to cast rocks from the sky to demolish enemies.

There’s also the Huntress for all of you elf lovers out there. She is a nimble, long-range fighter whose powers are nature-based and she can also summon beasts to help in her plight.

Of course, no party would be complete without the Warrior, who is just the meat and potatoes guy of the group. He has all of the special close-range attacks and will tank when needed.

Hellbreed will start out in the general meeting area which is called Jumprock; this is the staging area for your games. From there you can chat with other players and trade or sell equipment. Then when you are good and ready, you can take off into a mission to fufill your quests. When playing online, it works out well to have a good balance in your team. Although it can be fun at times to have all one type of character, there is always a chance of getting decimated pretty easily.

In terms of items, the weapons are upgradeable and there are also recipes in the game that you can use to buff your current skill set. Be careful — once you use a recipe, it will be gone. If you need more space in your pack, you can also use diamonds which are the real currency treasures in the game. You can use those diamonds to help you buy that special item that will make you totally badass or just make your time in the game go a little bit faster, and who doesn’t like speed?

In addition to there being a metric ton of stuff to pick up in this game, they have also included achievements that you will be able to show off to people online. This is a nice step not usually seen in free-to-play games and it is a welcome one. Now, if we can only streamline these so that there is an overarching measurement in all games like this so we can see all of them together and not just on a game-to-game basis.

Hellbreed was developed all in house from an engine created by the Inflammables and it seems to be working out nicely. Along with that, they are able to offer 150 levels for you to explore.

All in all, this game will give you a ton of stuff to do with your time, either in five-minute increments, or an hour or so long campaign. Since it is flash-based, it can even work on my crappy netbook!

Hellbreed is live as of today.