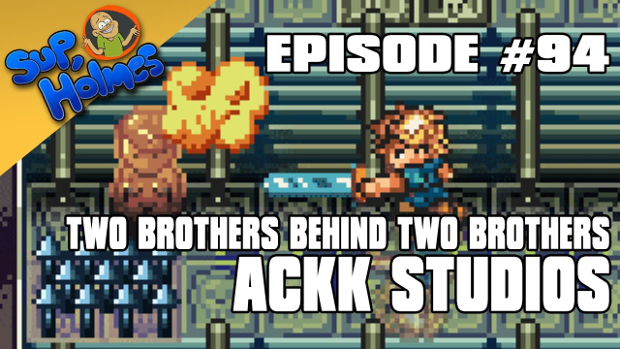 A week and a half ago on Sup Holmes (now on iTunes), we welcomed Brian and Andrew Allanson of Ackk Studios to the program. We talked about their breakout success Two Brothers, their start in making their own games (and Pokemon toys) before they were old enough to drive, the differences and similarities between using writing, coding, music, and visual art to convey ideas, and a lot more.

I was taken aback by how creating games seems to be something that’s hardwired into the Allanson brothers’s DNA, though the idea that their games have the potential to be widely accepted and appreciated is still so new to them. They’ve made a lot of games over the years, some of which they would only consider releasing under assumed names, as they never intended for anyone outside of their small circle to ever experience them.

Their excitement to finally share their games with the world at large seems to be taking precedent over their interest in getting big money, as their next game will be a free title for phones that will take a very different approach to life and death than Two Brothers. After that, it’s the release of Project Y2K, a game where you use excess AOL start up discs (or their non-lawsuit friendly parody equivalents) to battle opponents, among other things. It’s definitely one to look forward to.

Thanks again to Brian and Andrew for being on the show. We’re taking a break from live recording this weekend as Sinistar (our intrepid production manager and engineer) is moving to a new galaxy. Stay tuned for the rerun of our most recent episode with Jake Elliot (Kentucky Route Zero) and come on back on February 16th when we welcome Mike Kasprzak to the program.