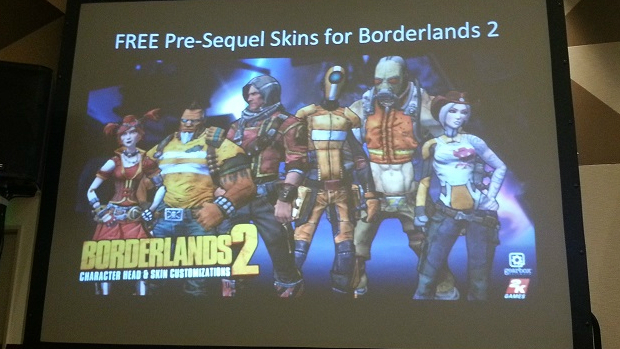 Over the weekend at GaymerX, Gearbox announced that it would be releasing free Borderlands 2 customization options tomorrow. The idea behind them came from the prolific Borderlands cosplay community, so the Borderlands 2 characters would be dressed as various Pre-Sequel characters. Thanks to Gearbox forum user Norrin Radd, we have the above off-screen image of the Vault Hunters sporting the new skins and heads.

It looks like Gaige is dressed as Moxxi, Salvador as Wilhelm, Axton as Athena, Zer0 as Claptrap, and Maya as Nisha. Even though I have been following Borderlands: The Pre-Sequel fairly closely, I cannot seem to place Krieg’s costume. Any ideas out there?

The new customization options should show up as a free title update, but rather than being simply granted to players, they will be included as rare loot drops. It looks like it is about time to start grinding with my Siren again. That cowboy hat is too good to pass up.