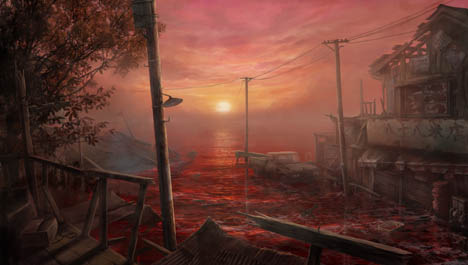 I know we’re starting to sound like a broken record here at Destructoid, but I’m going to have to play this one again after seeing these new screenshots. Again, SIREN: Blood Curse looks amazing. And again, these screens look way better (and more interesting) than Silent Hill 5, and this is coming from a hardcore Silent Hill fan.

Of course, looks aren’t everything. I still haven’t decided if I like this 12-part episodic release schedule they have planned, and we haven’t talked cost much yet. And seven playable characters in a survival horror? That’s kind of weird.

I am a survival horror whore, though. These new shots look amazing. I stared at the red lake image (above) for a long time, thinking that I want to play a game that has this type of imagery. Howard, the dude in the images, seems like a pretty cool guy. But I don’t know if picking up that knife next to that obviously-not-dead Shibito is the best idea.

This summer, PS3 owners will finally get their first taste of the eerie village of Hanuda. If this game plays as well as it looks, I think we’re in for a 12-part treat. What do you think?