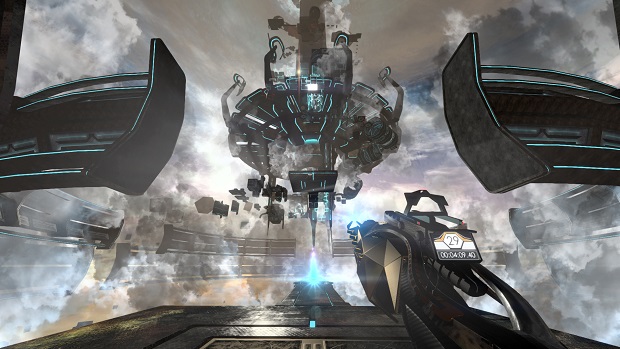 Coming to Steam this Friday

Deadcore is a futuristic first-person shooter/platforming hybrid that got its start in a 7DFPS game jam in 2012 by five friends who met while studying videogame design in Angoulême, France. Extended work on the prototype was originally planned to only last three months, but continued on for the next two years — eventually resulting in the group forming Studio 5 Bits Games; and, as we’ve mentioned earlier, the title being picked up by publisher Bandai Namco.

While the teaser trailer provided doesn’t offer a lot of insight into how the game actually plays, it does give you a good idea of what the platforming environments will be like. While strikingly beautiful, I don’t feel that the teaser does the title justice. To better illustrate what the first-person gameplay in Deadcore is like, have a look at the alpha trailer released last April and make sure to check out the latest screenshots posted in the gallery.

Deadcore feels to me like it combines some of the best aspects of the first-person gameplay from Valve’s Portal titles while at the same time incorporating the acrophobia-inducing platforming featured in Coilworks’ Cloudbuilt. In the short period of time that I’ve spent playing the game, I have to say that it’s as fun as it is beautiful. If ever I wanted to play a game using the Oculus Rift, this would be it.

While the official Steam page isn’t available quite yet, the studio has informed me that it should be up sometime soon and we can expect that the game will be priced around nine dollars when it launches for the PC, Mac, and Linux platforms this Friday.