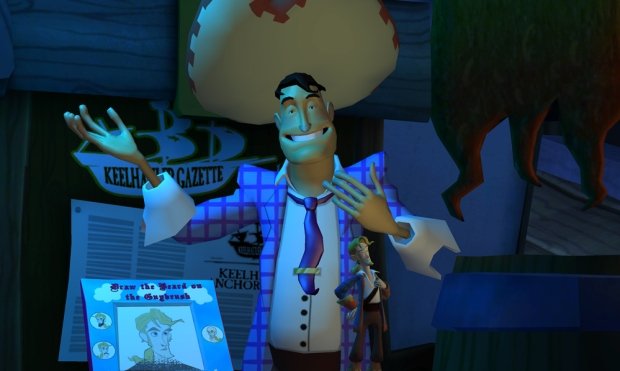 The fourth and second-to-last episode of Telltale’s Tales of Monkey Island series, intriguingly entitled “The Trial and Execution of Guybrush Threepwood,” comes out this Friday.

According to the Telltale press release, episode four “finds Guybrush double-crossed by the pirate hunter Morgan LeFlay and returned to Flotsam Island against his will. Facing an angry mob of poxed pirates with a long list of grievances, Guybrush must defend himself in court against a smooth-talking prosecutor and absolve himself of the false accusations in order to continue his quest to rid the Caribbean of the insidious pox of LeChuck!”

Which is great and all, but only one thing truly matters about all this: Stan the Used Ship Salesman is back! So long as his suit still does that thing where the stripes don’t move even as his arms do, I will be satisfied. Not to mention Dominic Armato considered the fourth chapter his favorite of the series, so I’ll be looking forward to it even more than usual.