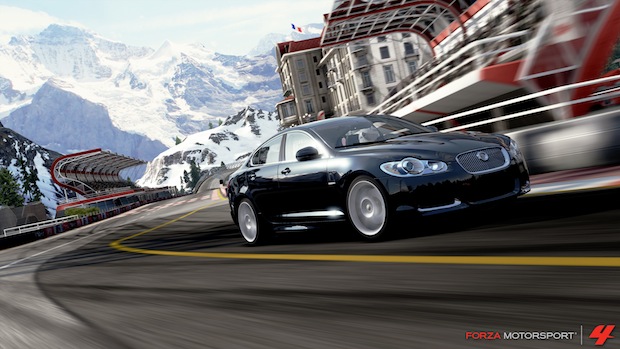 Car lovers, today’s your day. The Forza Motorsport 4 demo goes live today, giving you just a small taste of the game before the October 11 launch. Starting today, Xbox LIVE Gold members can download the demo; Xbox LIVE members will be able to download it starting on October 7.

And I mean small taste. I’m playing the full game for review now. I’ve played it for about 3 days straight and the game’s stat system told me lsat night that I was only at the 1.9 percent complete mark. This game is huge!

You get five cars in the demo:

You only get the Bernese Alps course. Bummer. There’s so many other great courses for you to see in the full one.

Forza 4’s all-new Rivals Mode will be up and running for this demo. This mode lets you compete online against their friends in a variety of game types, whether they’re online or not. What’s cool is that the backend does all the work, meaning that you can pull up the Rivals menu at any time for a good challenge.

To celebrate this demo’s launch, a live-action short film titled “Endangered Species” will be available at TopGear.com Jeremy Clarkson, host of Top Gear, is the narrator. Be sure to check that out when it goes live later.

How’s the game, you ask? So good. Soooooo good.