A ton of people are playing Forza. There was a 30 percent increase in players across the whole series last year, as 22 million people fired up one of the 10 currently-available games. More than 9 million people have played Forza Horizon 3, and that’s a statistic that isn’t padded by the advent of Xbox Game Pass. (When Forza Horizon 4 releases this fall, it’ll be the first ever Forza title added to Game Pass.)

That’s why it feels disingenuous to call Forza Horizon 4 an important game for the series. Horizon is established, it has a huge fanbase, and it shows no sign of slowing down. It’d only be important if Forza were at some sort of crossroads of quality. Forza Horizon 4 will almost certainly be another fun and successful game in a whole franchise filled with fun and successful games.

Forza Horizon 4 won’t rest on its laurels, though. It has stopped expanding outward for now, as Horizon 4‘s United Kingdom is approximately as big as Horizon 3‘s Australia. Instead, it’s adding seasons as a sincere way of varying gameplay. It’s a bigger undertaking than it may seem at first.

Developer Playground Games is based in Britain and as art director Benjamin Penrose tells us, it makes the studio uniquely qualified to recreate each of the United Kingdom’s four seasons. After all, they live it every year. It affords members of each department the opportunity to get detailed and constant samples of what each season looks, sounds, and feels like. For instance, audio engineers can easily capture what the wind sounds like both through leafless winter trees and on a breezy summer day. Setting a game somewhere like Australia really only allows key members of the team to do an on-location visit once. Penrose says “The quality bar has really risen as a result of the intimate understanding our team has for this setting.”

Seasons will affect everyone the same way at the same time, and this is a way Forza Horizon 4 really leans into its online features. The seasonal changes are based on real-world time. Every seven days, Playground will flip a switch and rotate everyone’s game to the next season. This influences not only how players drive, but what they’re able to access. An easy example is that ponds will be frozen over during winter, so anything that’s on the water will only be accessible then.

However, there are minor ways to bypass the mandatory seasons. When blueprinting a race (creating it to your exact specifications), any season can be chosen. This is how it’s possible to race during the summer while everyone else is set in the icy winter. But, that doesn’t extend to the online open-world. Penrose confirmed at launch, players won’t have any way to permanently alter the season; they’re at the mercy of the calendar-based rotation. 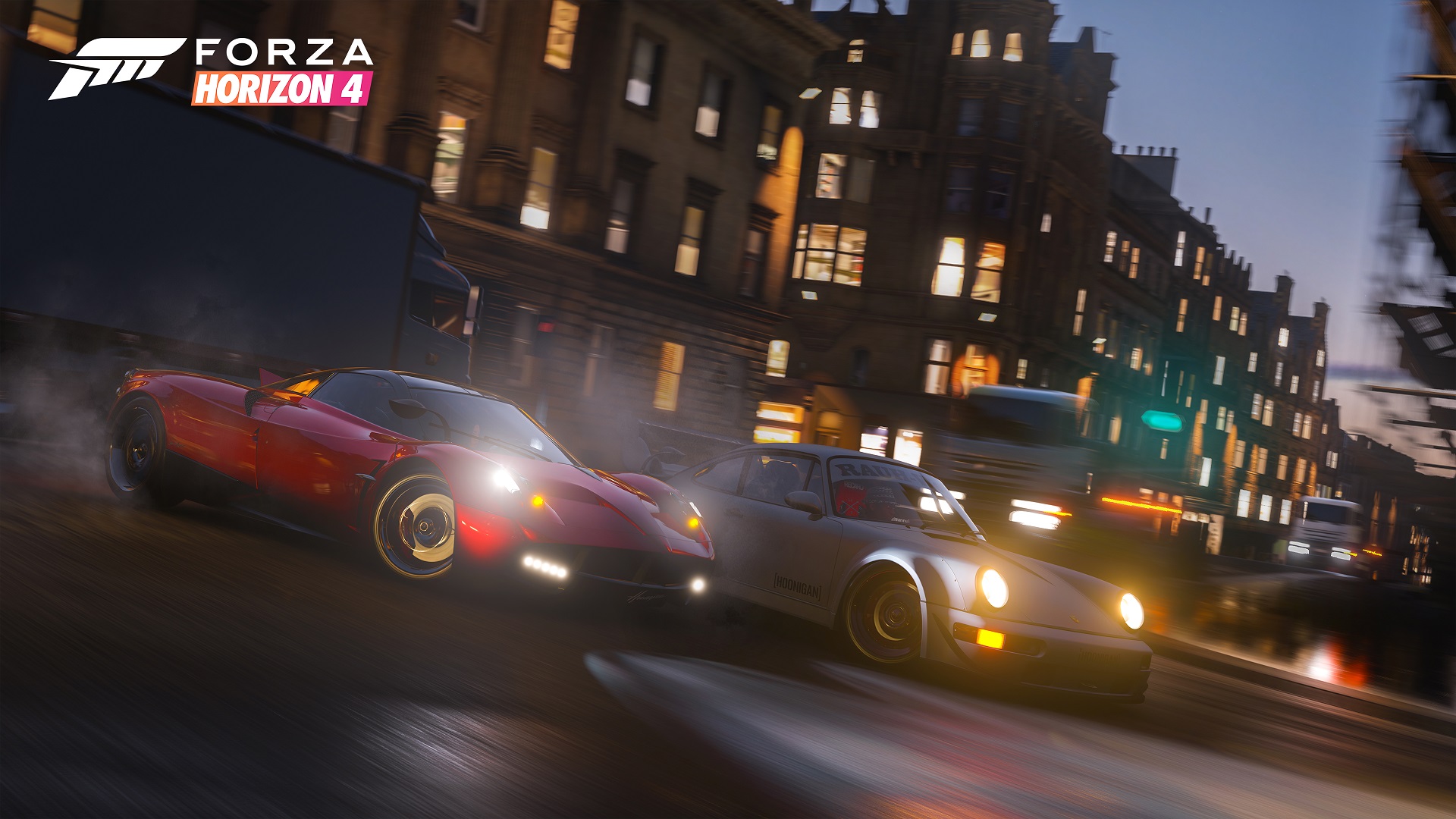 Horizon hasn’t ever dabbled in seasons much, apart from the Forza Horizon 3 add-on Blizzard Mountain. We asked Penrose how Blizzard Mountain might’ve influenced Horizon 4‘s winters or vice versa. He said “Blizzard Mountain helped us understand what it took to create a snowy environment, but it was just a snowy environment. It was quite self-contained. Winter is just one of those seasons. The winter you see in [Forza Horizon 4] is far more diverse and nuanced than the winter you experienced in Blizzard Mountain. It’s not just about snow. It’s about different levels of frost, ice, you’ll get gritted roads, wet roads — you’ll see much more of a variety to winter in Britain.”

There are more online features that Penrose outlined for us. Playground has made the quality-of-life decision to turn all open-world online players into ghosts in an effort to curb frustrating griefing. (This doesn’t apply to people you’re in a party with; collisions are very much enabled for those folks.) Also, rewind works in online mode for the first time. Of less importance, photo mode is available online too and every player in a session sees the same visuals and environment at the same time. 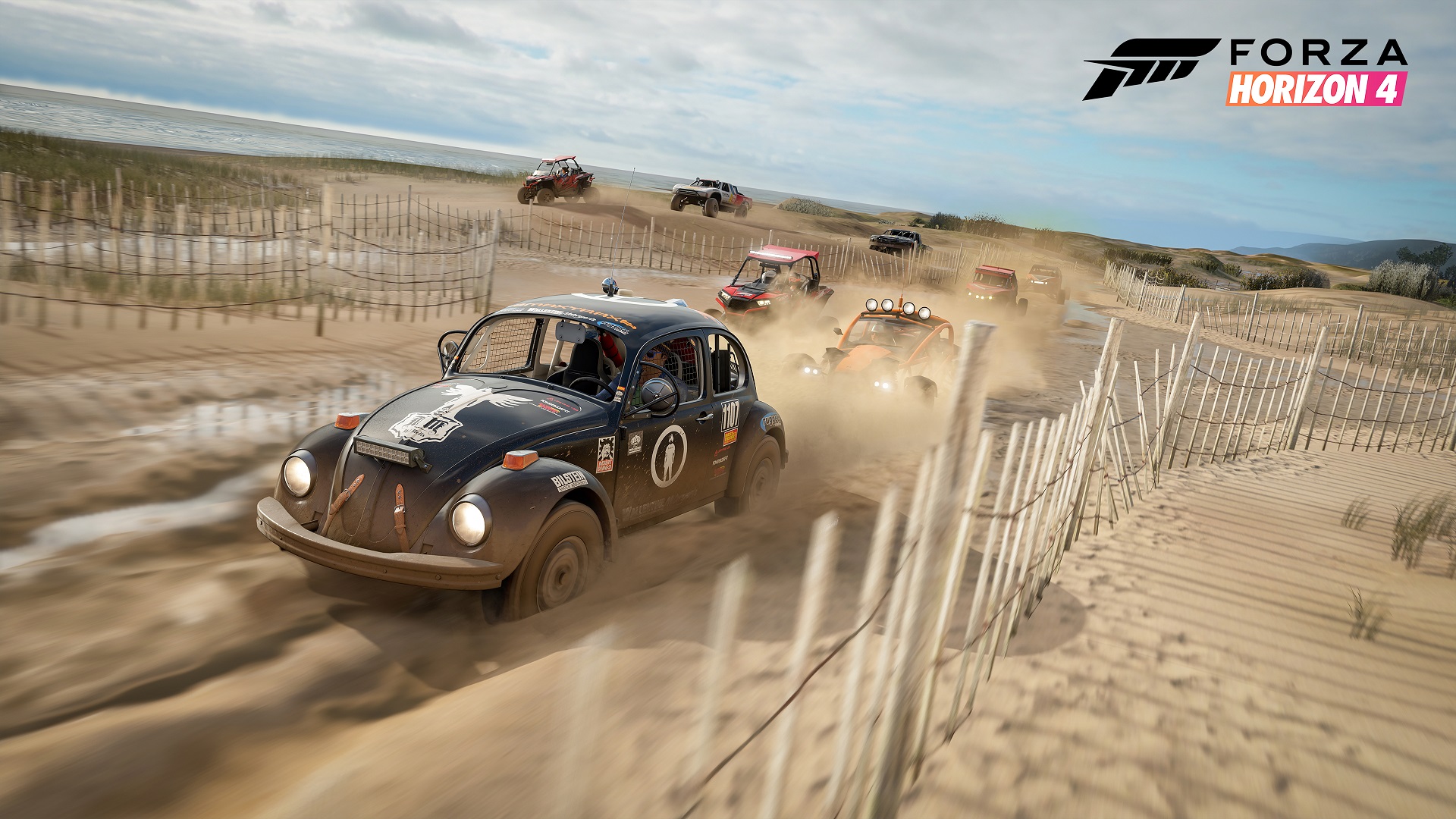 That’s not to say Forza Horizon 4 is entirely online, as some people may have feared. There’s a solo offline component just like with every other Horizon game. Seasons will also change appropriately for those who don’t have an internet connection. Playground seemingly wants to give you reasons to play online without forcing your hand.

Variety isn’t restricted to climate changes, though. Playground is adding new open-world activities to liven things up. For instance, there are jobs like stunt driver and taxi man a la Crazy Taxi. Make enough money and you can buy houses all over the United Kingdom. (Sadly, you cannot go inside these houses.)

With Forza Horizon 3, Playground tried diversifying by taking the game to Australia, a continent with a wide range of environments. With Forza Horizon 4, it’s evolving that sentiment in the only natural way: By accounting for seasonal change. The United Kingdom has enough variation — Scottish mountains, Welsh valleys, and English countryside, as Penrose noted — to be an exciting setting on its own. But, the idea all that will play differently a week later? That has Forza Horizon pulling away from the best of the pack when it comes to best open-world arcade-like racers.