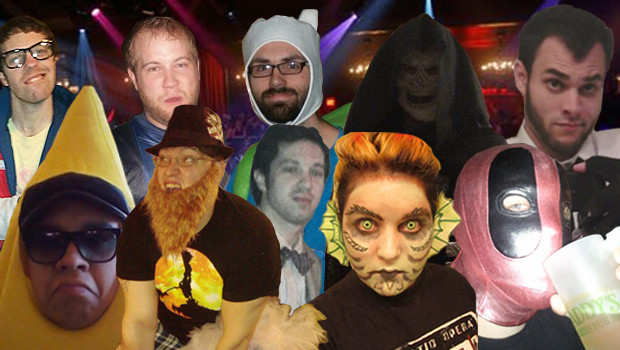 Big thanks to Revuhlooshun for putting together the collage!

In this edition of Forums, we have them: Seriously, you need me to synopsize this for you every month? Read the damn thing yourself!

Halloween has come and gone, and with it comes the annual traditions of tooth decay, drunken debauchery, and (as seen above) dressing up in funny costumes.

October also saw the return of AMC’s The Walking Dead series, and to celebrate Bec made some disturbingly delicious zombie-themed cupcakes inspired by 28 Days Later. Nobody tell her that technically there weren’t any zombies in that movie.

And to complete the zombie triumvirate, Epic-KxDtoid asks which platforming hero could survive a zombie apocalypse?

What would you give up to play videogames? In my case, finishing this recap is not one of those things. I hope you all appreciate my sacrifice, because I’d really like to be playing Rock of Ages right now.

TurboKill wants to you to share the shows/movies/music that have reached you emotionally, most likely so he can harvest your human “feelings” to power his Genesis Device. He’s tried this sinister plan before, but now I’m on to him.

It was recently discovered that Jim Sterling is responsible for every traumatic event in the history of the universe. A list of his crimes has been archived so one day future generations may finally be able to contain him and hold him accountable for his dark acts.

Dexter345 has started up a game of Werewolf (AKA Mafia) on the Forums, leading to an atmosphere of distrust and paranoia amongst the community while trying to deduce the identities of the beasts who hunt in the night. As of this writing we’re currently on the second game, so if you want to participate in a future game let Dexter know! Below is an reenactment of events from the first game:

If you feel the urge to express yourself with a creepy web comic generator and subvert a noble cause, Stop Bullying bitstrips is for you. Unfortunately now that it’s been posted on the front page, it’s ruined forever. Sorry about that.

The Liquor Cabinet lets you share your favorite mixed drink recipes with other Dtoiders, and hopefully discover a few new favorites.

The holiday season is coming up, and that means presents! Your suggestions for the official Destructoid Holiday Gift Guide are requested!

Technically this thread was made after the end of October, but just in case you’ve missed it the Dtoid Forums Secret Santa thread for 2011 is live. If you want to participate this year, make sure you visit before the end of November!

That’s it for this month! Thanks as always to the Mods, those who contributed to the FWHT Suggestions thread, and the twelfth-dimensional entity that lives in my head and controls my actions. Tune in next month when Zodiac will explain why existence as we know it is a complete lie.