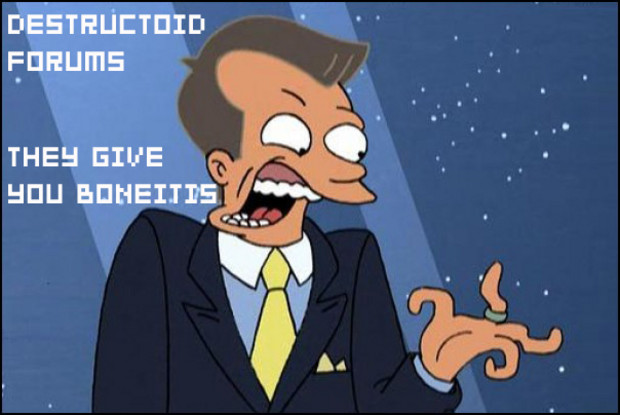 That’s a question that gets asked around here quite a bit. The answer to that question is very much YES.

For those of you that are new to Destructoid or maybe haven’t paid attention to the “other side” of the site, allow me to give you a bit of a recent history lesson.

First off, I’m Technophile (or just Will) and I’m the admin/manager of the Destructoid forums. I’ve been here on the site officially since December 2007 and lurked before that. I became admin of the forums in December of 2008. I come from a background of community management in the games industry and I’m a gamer. Enough about me though, let’s get on with the history lesson.

Destructoid has always had Forums, at least until January 2009. Unfortunately, early in January some nasty stuff went down and the Forums were forced to shut down for a little while. Up until then the Forums had a number of technical issues (timewarps anyone?). Despite all that, the community in the Forums was strong and they wanted their Forums back.

Being the new admin, I worked with Niero to get those Forums back up and running with some new software. Then on January 28th, 2009 the forums made their triumphant return. Over the months that have followed, the user base of the Forums has done nothing but grow. We’ve got a new look, threads were being pimped in The Daily Hotness and the staff has returned to post in the Forums frequently.

So now that you are all caught up, let’s recap what’s happened in the last month.

First off, we had some big numbers: the infamous Post your picture thread has hit over one million views and over 10,000 replies. Our most users online at once has nearly tripled with over 300 people online at once and our active users continues to grow to over 850 active users. Our daily active users average has risen to 280 and The Bar thread has also hit almost 350,000 views as well.

As I mentioned earlier, we also have badges. The badges range from winning a contest to getting your C blog promoted to the front page. As CTZ mentioned in his This week in community, BushofGhosts made us a whole new set of animated Dtoid smileys and post icons. Dyson posted the RetroforceGO!’s Great Game Trading Thread of Justice!! and the first trades have been mailed off. You should check it out and trade some games and swag!

If you are Forums regular, you know all this stuff. If you just lurk, well, don’t! Sign up! If you have never been to the Forums before, hit that Forums button up top there, read the rules and make an intro in the meet and greet. We talk about everything from the latest games, setting up FNF, the latest podcasts and just plain whatever comes to mind.

I’ll be back in another month. Hopefully I’ll be talking about you.