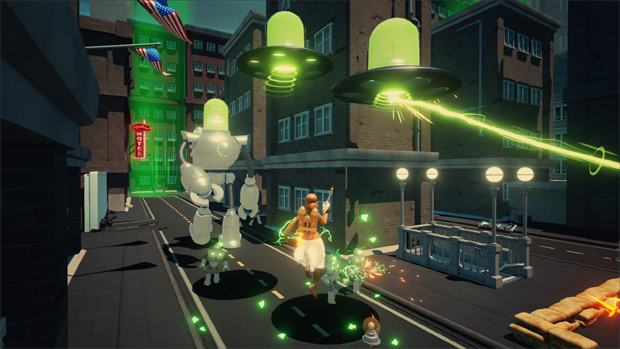 Hands-on with an early build

Leading up to PAX Prime, Clapfoot released a trailer for its base defense shooter Fortified. It caught my eye for a few reasons, notably the ’50s sci-fi movie theme and its general resemblance to Double Fine’s Iron Brigade (formerly Trenched). There aren’t too many games like it.

The build playable at PAX was fairly early in development but offered a decent enough idea of what to expect. Aliens are invading the city and you and up to three friends need to shoot them down, one wave at a time. I selected the character class with a jetpack, while my co-op partner had the unique ability to command soldiers around the battlefield. I think I made the right call.

We had the freedom to place defensive structures like machine gun turrets, a slowing device, and sandbags wherever we wanted within reason, and the shooting felt good — surprisingly good. My favorite weapon was the rocket launcher, because it sent robot invaders flying all over the place. The physics were wobbly, exactly as you would hope. Again, think lo-fi science fiction.

With some proper maze-building techniques, we managed to funnel robotic spiders into a single lane so we could concentrate fire on flying saucers and other stragglers. The boss, a hulking robot, must have been inches away from our base before he went down.

I wasn’t able to see the two remaining characters, upgrades, or any other levels — I’m told they will more than likely all be set within a city — but I liked what was playable enough to keep Fortified on my radar. The game isn’t releasing on PC and Xbox One until next year, so there’s time for more features and polish. In speaking with art director Adam Garib, it seems like the studio has a solid grasp on what’s needed to flesh out the experience. Fingers crossed.