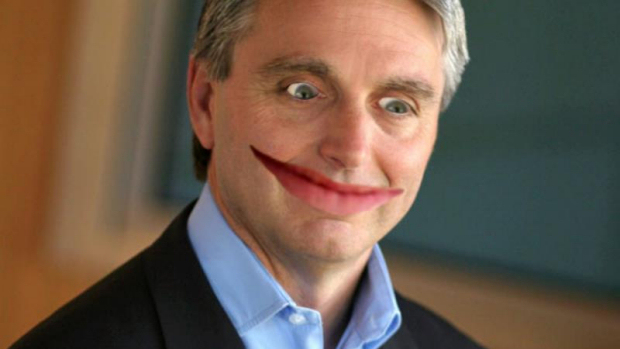 John Riccitiello says awful things from beyond the grave

Former Electronic Arts CEO John Riccitello has responded to the outcry of gamers worried about an always-online future. The recently resigned executive believes that, given time, we will all march in step with the industry and embrace the DRM-ruled future his people have envisioned for us.

“Gamers will want, and learn to love, the good parts of consoles being more connected to our digital lives than was possible with the machines launched eight years ago,” he wrote on Kotaku. “Some gamers fear the new consoles could be more about a DRM-walled garden than about enabling new types of connected gameplay. More about squashing second-sale (used games) than allowing us to play the games we own at our friends houses, in dorms or at home, without having to bring the disk with us. I don’t believe consoles managed as walled-gardens will succeed longer term.”

What we’re seeing here is some classic executive misdirection. In the same way EA claimed SimCity required a persistent connection because it was an MMO, our boy Riccitiello is convincing us we’re not walking into a walled garden simply by not calling it a walled garden. If you read his above quote again, you’ll notice he said absolutely nothing of substance, he offered no argument as to why an always-on future won’t be a DRM dystopia.

His argument basically amounts to, “It’s not because it’s not.”

That said, the ex-CEO wasn’t talking total bollocks, and did have some sensible warnings for Sony and Microsoft going forward.

“It needs to be simple, seamless and without a bunch of headaches with multiple registration, identity and pay gates. The walled garden will fall eventually. At launch, Sony and Microsoft must avoid putting up new and alarming DRM schemes, and focus on enabling the cool new game experiences that seamlessly connected consoles allow.”

Of course, where Riccitiello seems confident the new consoles won’t bog us down with extra hassle and erect more barriers between customers and their entertainment, I can’t say I’ve got the same faith. While movies, music, and even books have gotten more streamlined, more instant, and easier to access, games have only become more cumbersome, with mandatory installs, registration codes, and pre-order bonuses for the same game that compete with each other.

The game industry thus far has not proven itself interested in making gaming more streamlined, efficient, and accessible. I certainly hope the upcoming generation changes that, but given the many disturbing things we’ve already heard about the Xbox One and its convoluted bullshit, that remains to be seen.