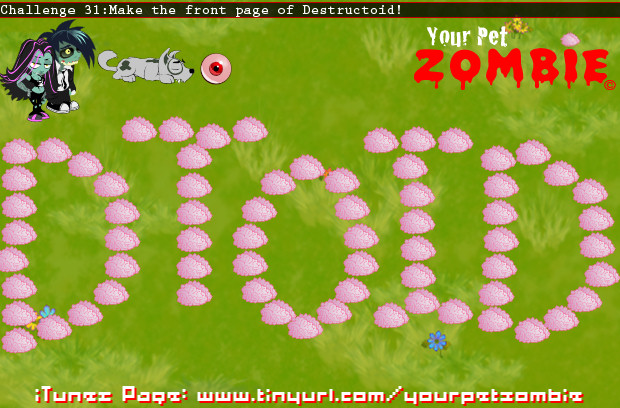 Newcomers to Destructoid won’t remember William Haley, but he was an editor for the site way back in the prehistoric age of 2007. In fact, he is the reason I started writing for this site, since it was an article he wrote for GamesTM magazine that made me aware of this wonderful blog and inspired me to ask for a job. It’s ironic, because Haley always thought I was a dickhead, and he was probably right.

Anyway, William Haley and developer Panda Cake have capitalized on the zombie game craze by adding their own, rather unique take on things. Your Pet Zombie is a virtual pet where players must nurture, love and feed their very own undead companion. Game Informer describes it as “Tamagotchi meets 28 Days Later.”

Players will need to feed their zombie the brains of panic-stricken civilians, but have to make sure he’s not overfed or he’ll get fat. The zombie can pull off kill combos, complete challenges and enjoy a number of upgrades, including a zombie girlfriend. For a mere $0.99, it looks like a really fun little game. I’d say a buck is worth supporting a former comrade, wouldn’t you?

Hit the jump for full information and make sure to wish William the best of luck in his new game.

Have you ever wanted to have your own flesh-eating virtual pet? Well now you can! With new Your Pet Zombie for the iPhone and iPod Touch (only 99¢!), devouring panic-stricken survivors has never been easier!
Your Pet Zombie comes equipped with the latest in brain-matriculating features, including:

Strategic Touch Action!
Your Pet Zombie follows a strict diet of brains, brains, and more brains. Wait until those nasty humans try to sneak by your zombie when he’s sleeping, then spring your trap and tag them in the order you’d like them to be eaten! Some survivors take longer to eat than others so using strategy, upgrades, and quick reflexes to ensure the highest possible body count is key.

Make sure to feed it each day or else it will eventually starve and die…again.

Fat Zombie
When it gets stuffed, your Pet Zombie grows fat and tired. You’ll have to drag and drop survivors to keep feeding it. At least you don’t have to chew them up first and spit them into its mouth!

The Works
String together kill combos, complete Challenges, and rack up enough brains to buy new upgrades, buddies, and toys for your Pet Zombie in the Brain Shop. You can even gain the ultimate screen-clearing attack, the Zombie Apocalypse, an homage to Akuma’s Raging Demon.

Zombie’s Best Friend
The afterlife can get kind of lonely…why not purchase a Zombie Puppy to keep your Pet Zombie company? The Zombie Puppy might even help keep those survivors around a bit longer for easy pickings.

Hot Zombie Love!
Playing fetch with the Zombie Puppy is fun, but sometimes a zombie needs something more. The Zombie Girlfriend will charm military survivors making it easier for your Pet Zombie to catch them, and look good while doing it. You know…for a dead chick.

User-Requested Updates!
Panda Cake wants to make our games the best they can be! We will be taking customer feedback on what they’d like to see in the game and implementing the most-requested features in future updates. Individuals who come up with particularly cool ideas will even get their names in the game’s updated Credits.

What do zombies love even more than updating their Twitter with totally unnecessary information about themselves every ten seconds? That’s right: horror movie trivia!
Simply follow Your Pet Zombie on Twitter (www.twitter.com/yourpetzombie) and @ us with the correct answer to the weekly trivia questions or quotes for a chance to win $20 Apple Store gift cards.
Coming Soon!
The upcoming Zombie Lovers expansion includes a fast-paced Anti-Survival mode, a Thriller outfit for your Pet Zombie, new items and abilities, and additional Fantasy mode survivors including a wizard and witch to go with those elves and orcs!

All this and more, plus a steady stream of planned and user-requested updates! For half the price of something that costs $2, you can score one of the most unique iPhone games in the universe!*

*That we know of.