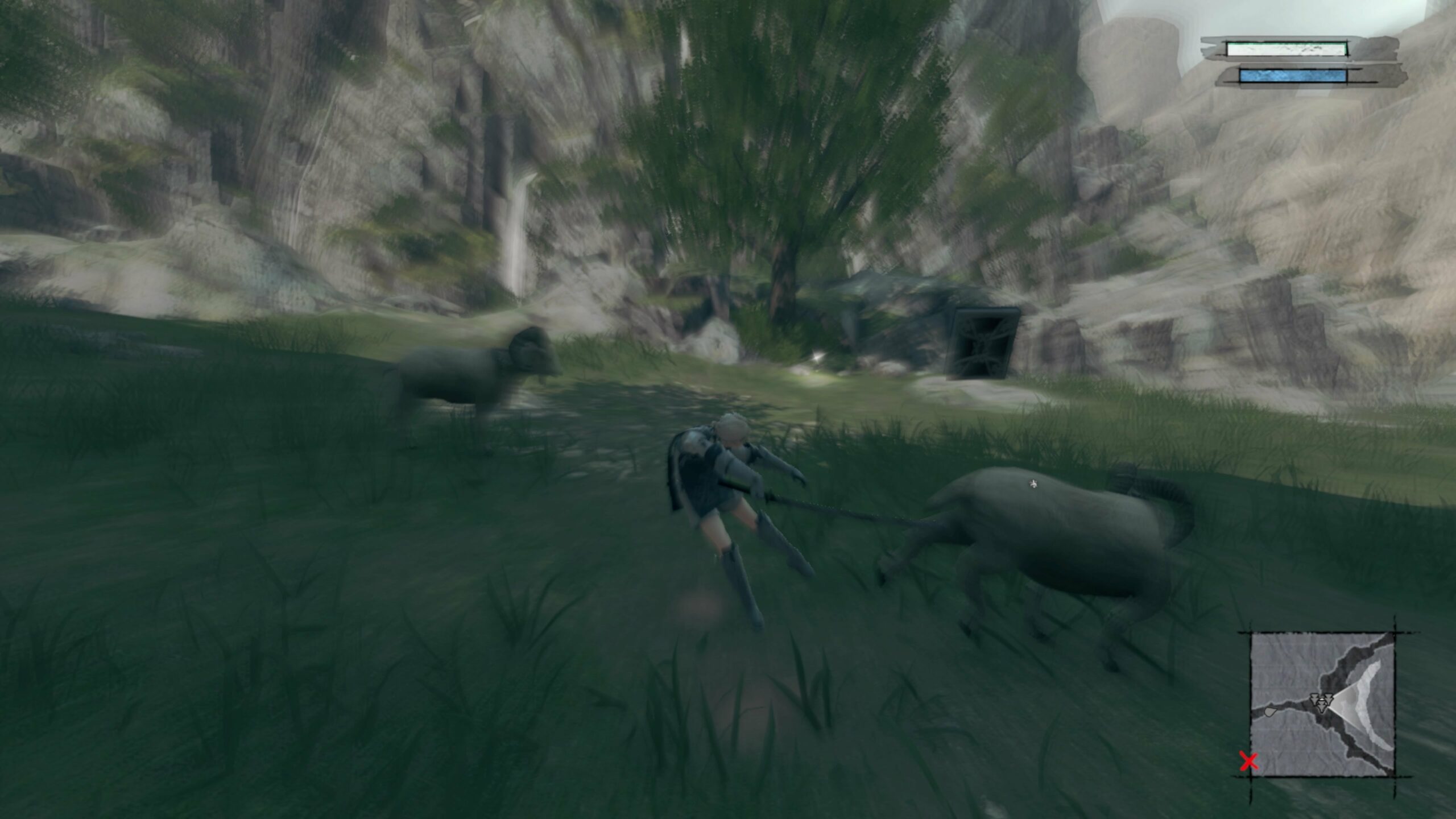 The world of Nier Replicant is full of dangerous mysteries. In its opening moments, you fight swathes of malevolent creatures determined to strike you down.

Yet none of them draws my ire as much as those damn goats.

I’m still working my way through the opening hours of the original Nier‘s remake/”version update;” for more on the rest of the game, check out Chris’ writeup on Nier Replicant ver.1.22474487139…, the very long version of a game I’m just going to call Nier Replicant from here on out.

Throughout the beginning of protagonist Nier’s tale, I’ve had to fight escalating monstrosities: both fearsome beasts and malfunctioning machinery, as well as dozens upon dozens of Shades of varying size and strength. I was certain one Shade in particular was going to be my white whale; it shows up a few hours into the game, hanging out in one of the major throughways between towns, and it has a habit of one-shotting you with its surprisingly powerful hits. Yet once I recruited the help of Kainé, it was simply a matter of keeping my distance and firing off magical lances until it fell.

There is one adversary that seems to constantly get the upper-hand on me, though. Alongside the obvious aggressors in Nier Replicant‘s overworld, there is also wildlife. Usually they’re just fodder, a simple resource that needs to be slashed or blasted with magic and subsequently harvested, so I can bring the ingredients back to town for a side quest.

Goats do not mess around, though. Some animals will attack if you get too close, but nothing hits quite like a surprise kick from a goat. And if you get anywhere within the vicinity of these goat’s rear legs, they will laser-target your skull and bring two devastating hooves to bear on your poor, hapless self.

The other night, I was powering through some side quests, stockpiling cash for a new weapon I wanted to buy from the shop. At several points I had to make the trip from my home to the desert kingdom of Facade. While the desert holds its own dangers, the road that takes you there has one chokepoint that seems tailor-made to funnel players into the crosshairs of an angry goat.

And Nier‘s goats don’t just kick you and call it a day. While you’re still trying to stand up after having your day ruined by a farm animal, said goat is already squaring up for a headbutt. These goats are really looking to teach Nier a lesson, it seems.

Suffice it to say, by my third time getting wall-splatted by these jerks during sprints between towns, I just started blasting them with magic. They have very low health, but they always return. I know they will. And when I least expect it, when I’m just lazily flitting between hub areas for a few ingredients, that’s when their hooves will strike.

All that said though, I’m really digging Nier Replicant. Be sure to read the message its creators put out ahead of launch, and if you do pick it up, be extra cautious of the goats. They might just seem like another resource, but they will absolutely ruin your day.