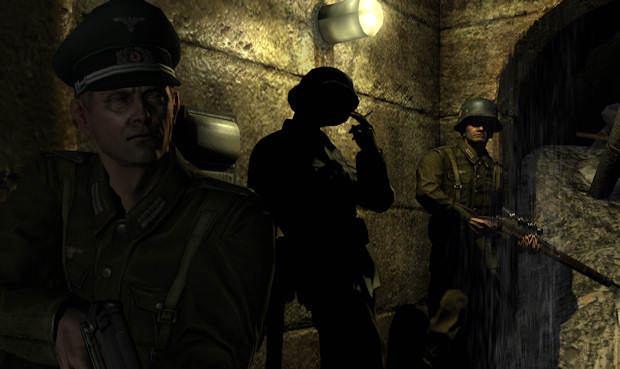 It’s hardly surprising that World War II has been inspiration for so many videogames. That conflict was, after all, perhaps the only truly morally clear war humanity has ever had, where reasonable people can see an obvious good side and an undeniable evil side. Such black-and-white conflicts lend themselves perfectly to games, and as such, Nazis have become some of the most common videogame villains of all.

Nazis are the ultimate bad guy, a reflection of humanity’s darkest side and an almost iconic representation of mankind’s capacity for evil. They are the perfect template for a good videogame enemy — a uniformed, emotionless tool of nefariousness that elicits no guilt when mercilessly gunned down.

For their contributions to videogames, we salute the Nazis. Join us on a Swastastik voyage through some of our favorite Nazi encounters, and what made them so great.

While World War II games have been around since the eighties, it was arguably Wolfenstein 3D that remains the most recognizable early game that involves blasting fascists right in their racist faces. iD’s iconic shooter precipitated the myriad WWII-themed shooters that would come, becoming the first ever FPS to feature hard-working-American-on-German violence.

Wolfenstein 3D wasn’t shy about its inspirations either, featuring levels drenched in Nazi imagery. Emblems of the Third Reich adorned the game’s many corridors, and the national socialist anthem “Horst-Wessel-Lied” was played throughout. In Germany, where the use of Nazi symbols is illegal without special cause, the game was confiscated.  The fact that one level of Wolfenstein 3D is made out of giant top-down Swastikas couldn’t have helped.

The NES port of the original PC game took out the iconography, and also replaced the game’s attack dogs with giant mutant rats. iD Software noted the irony in Nintendo being fine with shooting people and rats, but not dogs, an irony that is still very prevalent today with Call of Duty: World at War generating controversy for its own canine-killing shenanigans. Wolfenstein 3D is best noted, however, for its inclusion of Adolf Hitler himself, seen piloting a mech and demonstrating just how well Nazis lend themselves to artistic license.

Wolfenstein 3D was, itself, based off earlier games with Nazi-flavored fun. Castle Wolfenstein was the first in the series, and was a slow-moving stealth game on the Apple II that charged players with the task of escaping the titular German stronghold. Beyond Castle Wolfenstein was the sequel, which I only mention because its subtitle was “Stop The Fuhrer.” I can’t read that without imagining Dick Dastardly singing it while chasing a winged Hitler in his flying machine.

Wolfenstein 3D would lay the groundwork for the many shooters we would see in coming years, putting Nazis right up there with zombies and Ninja in terms of stereotypical videogame bad guys. Realistic Nazis are bad enough, but their clandestine nature and powerful, chilling aura have made them ripe for aforementioned artistic license. Rumored links to the occult and the national socialists’ well-documented history of interest in genetic experimentation have given game developers plenty to play around with, and this “expanded universe” feel of the Nazis is what’s kept them so interesting to fight over the years.

Perhaps my favorite game to include fantastical representations of the Nazis is Bloodrayne. Now, Bloodrayne is not a very good game, by any standard. It’s sloppy, unbalanced and has some of the most ludicrous writing I have ever seen. However, the premise of a sexy female vampire on a quest to assassinate fascists is just so deliciously stupid, and the game itself so tongue-in-cheek, that it remains one of the most memorable Nazi games out there.

The ridiculous plot is centered around the idea of a group of ghostbusting Nazis trying to resurrect a devil in a plot to bring Hitler into power. The game has everything you could want from a Nazi game, such as possessed stormtroopers, camp Siamese twins, mechs and, of course, disturbingly sexualized imagery of a hot leather-clad vampire wrapping her legs around Germans and drinking them dry. While moaning. Moaning exquisitely.

Bionic Commando is another game that takes liberties with the Nazis, and predates Wolfenstein 3D. Rather than setting the game during the World War II era, Bionic Commando takes place in the year 198X, where the hero does battle with futuristic Nazis (known as the Nazz in the instruction manual). Of course, this game is best known for including the man himself, Adolf Hitler. Although referred to as Master D in the US version of the game, he is unmistakably Uncle Addy H, with the futuristic Nazis plotting to resurrect him and retread the road toward world domination. Naturally, the game ends with Master D’s head exploding. A truly iconic moment of videogame history.

The “alternate history” plotline in which Germany wins WWII has been used quite a bit in other mediums, but is strangely absent from a good deal of games. Turning Point: Fall of Liberty attempted to address this with a fictional German invasion of New York. The idea was ridiculously promising, and developer Spark Unlimited is to be commended for inventing some logical technology that the Germans may have developed had they not been stopped in time. Sadly, however, the game simply wasn’t very good. A current-gen action game based on the idea of Nazi victory could be a truly chilling and unsettling game, and I sincerely hope a studio with pedigree steps up to the plate to tackle the concept one day.

There are some games that don’t feature Nazis, but have definitely been inspired by them. The Killzone series was notoriously influenced by National Socialism when creating the Helghast, a race of downtrodden and fiercely imperialistic race of people led by the Hitlarian Scolar Visari. Their history as a race of people manipulated and driven by oppression and sanctioning mirrors the way Hitler took control of the minds of the German people.

It’s the versatility of the Nazis and their instantly recognizable foreboding that make them fascinating to me in terms of what videogames can do with them. They are so easily recognizable that you can drop them into almost any situation and it makes things all the more sinister. The very fact that they were themselves immensely insane and twisted means that their involvement in science fiction and demonic chicanery is just believable. Nazis were so over-the-top in real life that they don’t look out of place in a game full of vampires and werewolves, as Atlus quite clearly demonstrates in Operation Darkness.

This alone makes them such classic videogame enemies, which doesn’t even go into the fact that it’s just satisfying to mow down waves of racist, sadistic fuckholes. Some even find it cathartic, such as the Jewish rabbi who praised Call of Duty: World at War for helping him deal with his fear of Nazis and providing an almost exorcising experience by allowing players to storm the Reichstag and personally end the Nazi scourge, if only virtually.

Nazis are not going away any time soon. Raven Software is currently working on a brand new Wolfenstein, which is distancing itself from the WWII shooters that it arguably started. This new Wolfenstein goes in very much the science-fiction direction, with power-armored soldiers and laser beams and all the other things that are both ridiculous, yet so very fitting for a member of the Third Reich to have. Velvet Assassin is another upcoming World War II game that wishes to craft a deep story around a female assassin who finds herself behind enemy lines. In short, Nazis will be with gamers for a very long time.

It would be wrong to express gratitude to Nazis for being such excellent villains because, well, they’re Nazis. However, since they decided to show up without being asked, it’s great that they at least serve some purpose in human history, and that’s to get shot, stabbed and drained of blood by righteous gamers all over the world. For that, at least, we can salute them. Well done Nazis. Well done for dying over and over again for our own sick amusement.