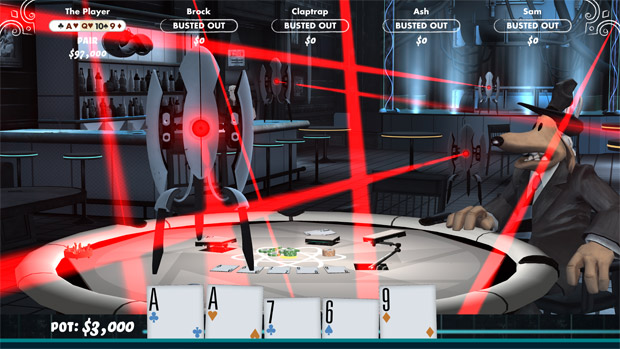 Following last week’s leak, Telltale Games’ Poker Night 2 has been officially announced. Let out a deep sigh of relief that this was not some unfortunate, cruel April Fools’ Day joke and is indeed releasing in April for Steam (Windows and Mac), Xbox Live Arcade, and PlayStation Network with other unnamed platforms planned as well.

The full cast includes Claptrap from Borderlands (I know!), The Venture Bros.‘ Brock Samson, Sam from the Sam & Max adventure series, and Ash Williams of The Evil Dead fame. Portal‘s GLaDOS will also make an appearance as the dealer. Another eclectic group of characters, to be sure.

In Poker Night 2, players can earn “Bounty Unlocks” for use in other games, such as character skins and heads for Borderlands 2 (all systems) and gear for Team Fortress 2 (PC only). Always count on hats.