Samurai, Vikings, and Knights… an episode of Deadliest Warrior? Nope, February 14’s big release is For Honor, which as of today has opened up pre-loading for its upcoming open beta. The beta begins on February 9 for all platforms (PC, PS4, and Xbox One) and runs up until the game’s launch.

If the game looks like a solid buy, there are many discounts available. In fact, if you know where to look, you can knock at the minimum 20% off no matter the platform of choice.

On PC you can check out GMG or GamersGate, where Uplay keys are going for 20% to 22% off. This beats the Uplay/Steam’s standard $59.99 price and both are fully authorized distributors that include For Honor‘s pre-order bonuses. The deal is good for the cheapest Standard Edition all the way up to the most expensive Gold Edition.

Update: Prices are tweaked below now that the game is released. Suffice to say, the pre-order bonus DLC pack is no longer included.

On console there are two options for a 20% discount, but it’s more complicated than the straight up savings for PC gamers. You can head over to Best Buy and snag a 20% discount on all versions if you’re a Gamers Club Unlocked Member. This membership runs $30 for two years and gets you 20% off all pre-orders and newly-launched games (worth it if you buy a lot of titles as they come out for full price). A more expensive option is Amazon’s Prime program, which also nets you a 20% discount on For Honor. Like PC, all versions — Standard, Deluxe, and Gold — get the discount. 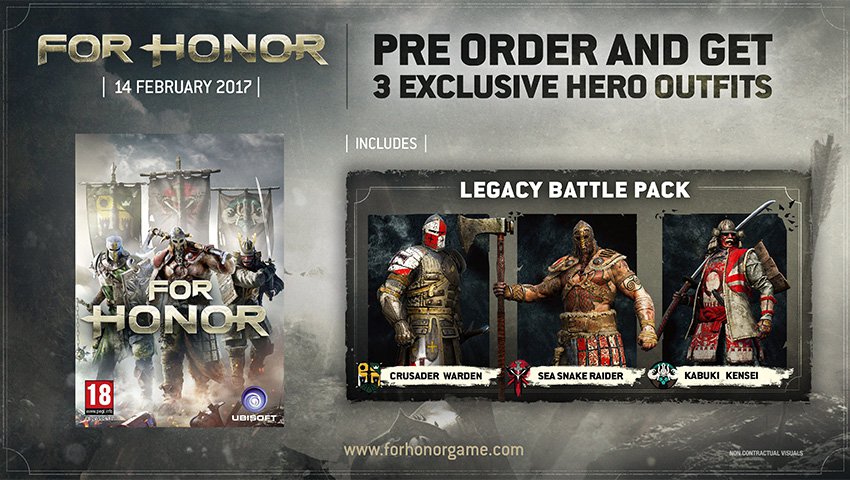 If day one is in your game plan, the pre-order bonus includes three “exclusive hero” outfits in the “legacy battle pack.” These aren’t anything exciting and as far as we can tell are simply cosmetic skins, but at the very least they are not stuffing any exclusive content behind the pre-order wall.

For those with more money to spend, the Deluxe Edition includes:

The Gold Edition includes all the above plus the game’s upcoming Season Pass. We personally don’t recommend paying extra for the Deluxe, as the only main perk is the in-game execution mood effect.