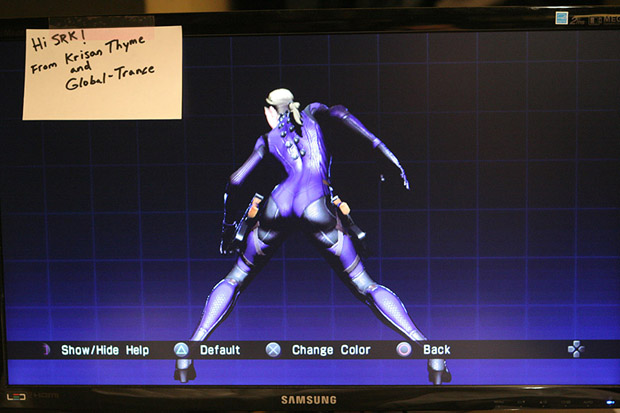 She’s not jumping over zombie dogs and summoning Tyrants like she did in Marvel Vs. Capcom 2, but Marvel Vs Capcom 3‘s Jill still looks like a hell of a lot of fun to play. This footage is reportedly from the incomplete Jill  found on the PS3 version of Marvel Vs. Capcom 3‘s on-disc code, so we can presume that what we see here is only a glimpse of the full version of the character. Maybe her Tyrant super will make its way into the game after all?

Perhaps more importantly, maybe this leak will motivate Capcom to try a little harder to keep its character reveals under wraps. I can’t remember the last time I was truly surprised by one of Capcom’s character announcements. It seems like it’s always beaten to the punch, either by achievement lists, website code, GameStop listings, or some other Matlock-able source.

Or maybe that’s all part of the company’s marketing scheme. Leaked footage has a dangerous allure that you just don’t get from press releases. Maybe Capcom has learned to work that allure into something that works.

Marvel Vs. Capcom 3- Footage of Jill in motion [Shoryuken.com]

Filed under... #Marvel vs Capcom#Resident Evil