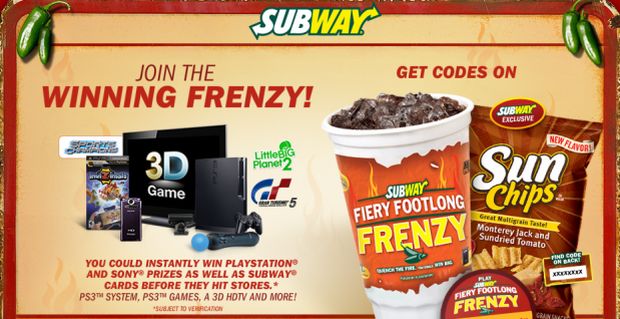 Earlier this week we found out that Sony and Subway have teamed up to give away some awesome PlayStation 3 related prizes. The “Fiery Football Frenzy Fueled by PlayStation” promotion is due to Subway’s new PlayStation-branded “Fiery Footlong” sandwiches, the Turkey Jalapeno Melt and the return of the Buffalo Chicken sandwich. All you need to do to enter for a chance to win is redeem the codes that come with a drink or bag of Sun Chips on Subway’s website.

Subway is also giving away prizes through their Twitter. There will be eight “fire drills” over the next few weeks where @SubwayFreshBuzz will tweet a link and the fastest people to enter their e-mail address will win prizes such as Gran Tursimo 5, $20 Subway gift cards, a year supply of Subway sandwiches and more!

The Twitter account will give people a general heads up on the days the giveaways will be held. They gave away a ton of copies of Little Big Planet 2 today as a matter of fact! Another giveaway will be held tomorrow on Subway’s Twitter.

So yeah, free stuff! Yay! Be sure to check out Destructoid for our contests as well, such as our Samsung Galaxy S phone giveaway and our Puzzle Quest 2 contest!