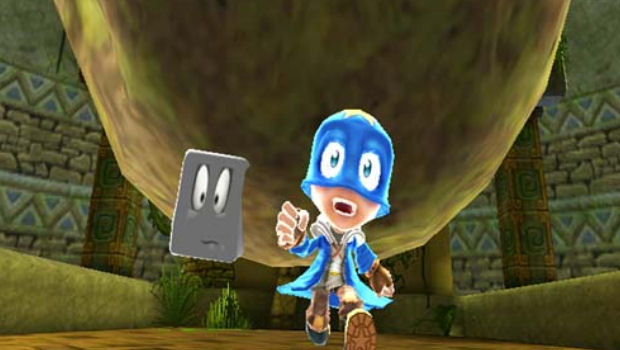 We’ve been chatting with Frozen North Productions CEO Julian Spillane about Flip’s Twisted World, a cool looking Wii platformer that I’ve personally been looking forward to. Whenever I see people talking about the game, I’m always dismayed to see people crying that it’s a big rip-off of Super Mario Galaxy.

I put the accusation to Spillane, and also asked if the team was inspired or attempting to compete with Mario’s popular Wii adventures.

“Well back in the day, people called Sonic the Hedgehog a Super Mario Bros ripoff, right? I will go so far as to say that we took a lot of inspiration from the visual aesthetic of Super Mario Galaxy, even adopting a similar rim-lighting effect, because it just worked,” explains Spillane. “The rim lighting and vibrant colours really allow the environments and characters to pop, which is important in a game that plays with spatial orientation as much as Flip’s. We did, however, take a lot of inspiration from many different games: the painterly style of the textures in Kingdom Hearts, the colour palettes of Wind Waker and Lost Winds, etc.

“Aside from visual style, Flip’s is a very different game. We’re game developers and we love what we do. We’re not here to ride the Mario train to Moneytown, we’re here to put a unique twist, pardon the pun, on platforming. Whereas in SMG the gravity and Mario’s physical reaction to it is out of the player‘s control, in Flip’s we put that power literally in the player’s hand. By holding ‘B’ and twisting the Wii remote, the player can turn Flip, the world, and even some objects and characters, at will at any time. This enables an unprecedented level of exploration and a truly 3D platforming experience.”

I think a lot of the accusations came from the same sort of people I tackled in my first Jimquisition video, the unimaginative sort of chaps who can’t see two similar things without screaming plagiarism. The game looks original enough to me, especially on a console where we could do with more fun platformers. What do you think, though? Big rip-off, or simply an inspired work of original gaming?