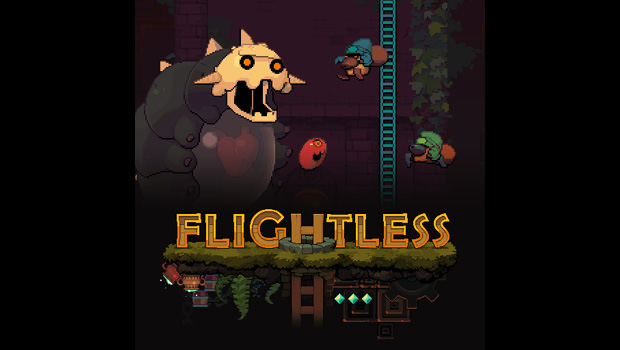 You can’t go wrong with ducks (and drop-in, drop-out co-op)

Indie developer Nitrome, known for its disgustingly massive selection of free web games, is prepping its first major commercial release, Flightless. It’s a fairly basic puzzle-platformer starring a thieving duck who has had its wings clipped as punishment for its crimes. You navigate dungeons, collect gems along the way, and encounter a boss or two.

Here’s where the party gets hot: Your duck is equipped with a magic ladder that can extend indefinitely until it hits a solid object. You can spawn and dispel this ladder wherever and however many times you like. More than a means of transportation, the ladder can be used to pin passing enemies into the ceiling or ground, instantly killing them, or to trigger out-of-reach switches.

You can invite a friend in on the action via perfectly seamless drop-in, drop-out co-op. By pressing the “2” key, a second duck will appear in the same room, controlled by the WASD keys while Player 1 uses the arrow keys. The screen splits, allowing each duck to explore the dungeon at its leisure. Either player can leave the game at any time by pressing “1” or “2” then rejoin by pressing the key again, instantly teleporting to the other player’s room. With this system, a duo can easily clear a dungeon in half the time.

There’s a demo on the Flightless home page that I urge you to check out. If you dig it as much as I did, vote for it on Steam Greenlight to give it the distribution platform it deserves.