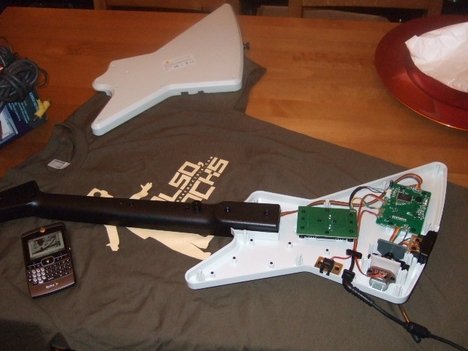 Now normally, I don’t listen to anyone who calls themselves “HairyArse.” The last time I did, I woke up in a pool of my own urine next to a Taiwanese prostitute who was mumbling something about pretzel dogs in broken English. Not pretty, but a good story to tell the kids.

But in this case, I made an exception. A gentleman who calls himself “HairyArse” over at AllAboutTheGames has proclaimed to have solved all the whammy bar woes surrounding the recent Guitar Hero II 360 release. The fix (as detailed on the site) involves simply removing the back portion of the guitar, loosening a few screws, and hoping to God you don’t accidentally break any significant components.

Being one of the unlucky few (thousand) who received a faulty guitar, I decided to give it a go. The final results were mixed.

Let me say this first — the whammy “problem” I was experiencing was slight. Slight enough that I can use it as an excuse as to why Dtoid community member, ExpertPenguin, is ahead of me on the leaderboards; but still noticeable, nonetheless. After taking apart and tinkering with the internal whammy mechanism, I did notice a slight improvement in its performance, but nothing earth shattering.

I will still probably return it to my local GameStop, but not before opening it up again and filling it with dead cockroaches. So the final verdict — your mileage may vary.

If you’re having issues with the whammy and for whatever reason can’t seem to get an exchange, go right ahead and listen to the man they call HairyArse. It’s simple enough, and as long as your remember “righty tighty, lefty loosey,” you’ve got nothing to lose.