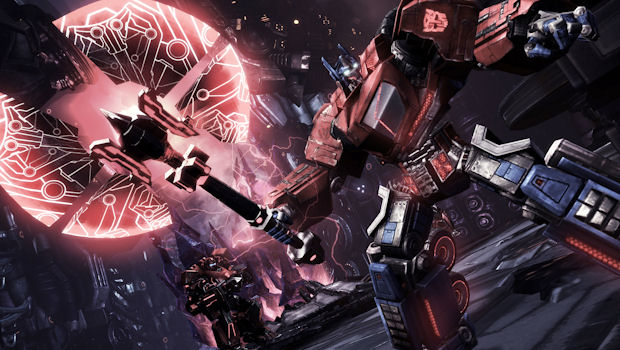 On Wednesday I was in San Francisco to play Transformers: War for Cybertron. After weeks of excited posts, many of our readers were waiting for me to report bitter disappointment, rubbing their hands with glee at the prospect of my misery. Who can blame them, really? It’s always funny watching someone set themselves up for a fall, and I’d been so interested in this game that I was set to fall hard.

Unfortunately for those readers who subscribe to Schadenfreude, I am here to tell you that Transformers: War for Cybertron is exactly what I expected it to be — a tight, anarchic, addictive and thoroughly fun game that brings prestige back to the Transformers brand. No, this is not Gears of War or Killzone, but it is a polished and love-laden action game that I had a distinct blast with. I also kicked supreme amounts of arse at it, despite having such a bad headache that I thought I was going to puke all over my hands.

Dale North already did two previews on the game, so I thought I’d summarize my impressions of the game in a list-style feature to make my point: Transformers: War for Cybertron has got the touch! 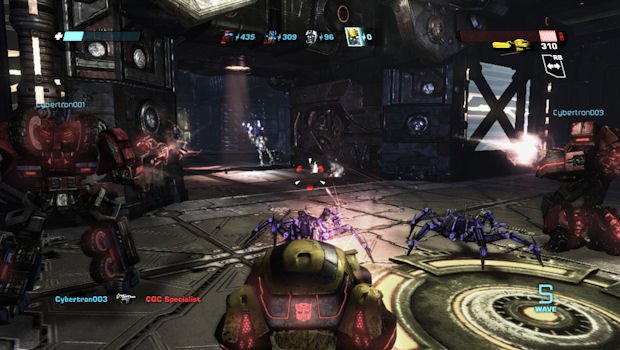 One problem Transformers games have always had is that they control like crap. Usually the robot modes feel halfway decent, but as soon as they switch to alt-mode, everything sucks horribly. This is especially true of jets, which tend to fly out of control as soon as the unfortunate bot transforms. Not so in War for Cybertron. The vehicles are almost as easy to use as the robot forms, and even manage to be useful in combat as well as in covering distance. The problem of jets has been eliminated thanks to the extra level of control players get. Aircraft can now hover so players get to hold a position rather than being forced to move at all times. The land-based vehicles can have some pretty brutal attacks, and zipping around the map as a scout car just feels good.

Transforming is done with a click of the left stick, which is pretty convenient, although it can lead to accidental transformations at times when getting in the thick of action. However, vehicles are just as able to hold their own in combat as robots so even an accidental transformation won’t break your gaming flow. It really feels as if both modes are crucial to the gameplay, and they both control perfectly fine.

2. It feels heavy without feeling clunky: 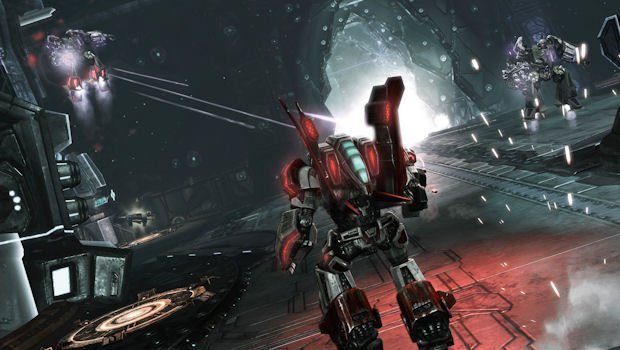 It’s difficult to capture the feel of “being” a Transformer in a game. You have to make the robots feel big and heavy and clanking, but in doing so the robots often feel weird and disconnected with their environments. Nobody wants a clunky characters to control that feels like it’s sliding around on the map rather than thundering around. War for Cybertron has a very “heavy” feel to the gameplay, but the movement is tight, allowing you to feel like a robot without feeling out of control.

When in vehicle mode, each alt-form feels how it should. It’s great to thrust through the air as a jet, zip out of danger as a car or thunder into combat as a tank. Everything feels big, loud, weighty and powerful, yet they also feel totally natural, which previous games have always wrestled with. 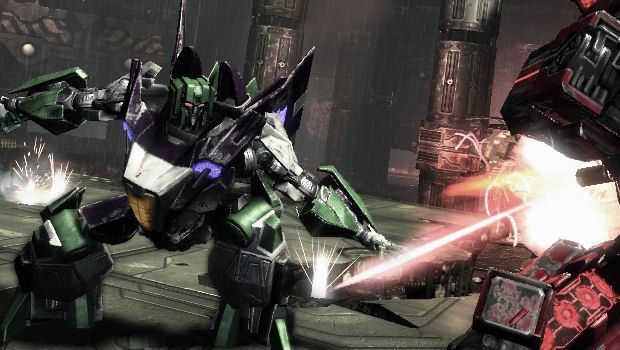 The game has four classes — Leader, Soldier, Scientist and Scout. They generally play how you imagine them to play, with the Leader specializing in buffs, the Soldier specializing in brute force, the Scientist specializing in tech, and the Scout specializing in stealth. However, the amount of flexibility you get within the classes means that you have some really cool ways to make each class deadly. For instance, the Scientist can heal other players, but he can also spawn a sentry bot, giving him the roles of both a medic and an engineer in more conventional games. Most classes have special skills that can help the team and harm the enemy, allowing plenty of scope for making a useful robot with any class you pick.

The classes level up as you earn experience in the multiplayer and have access to all manner of new weapons, special attacks, and passive abilities. Each Transformer is limited by equipment slots, and the special abilities all look so tempting that choices are bound to be hard. Each class gets its own unique kill streak bonuses that help out the entire team. The classes are really distinct, not just for their unique transformations (leaders are trucks, scouts are cars, soldiers are tanks and scientists are jets) but for the unique things you can do within each class. A lot of work clearly went into it.

As well as picking a class, players get a limited amount of customization too. I played around with making my own character, which basically means picking a predetermined chassis and changing the colors. The colors are restricted depending on if it’s an Autobot or Decepticon, which was a bit frustrating. I understand why this was done, to make the factions distinct, but it’s a shame that the Autobots got the bright yellow and orange, meaning I couldn’t make Sunstorm for the Decepticons. I was able to compromise and make Acid Storm though, so I suppose it’ll have to do. 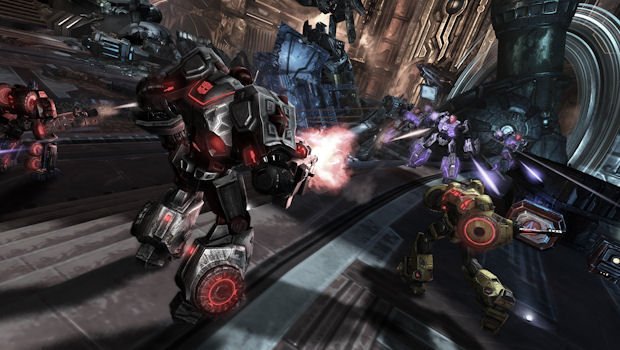 Or, as War for Cybertron calls it, Escalation Mode. Yep, WfC is getting its own Horde Mode and it’s really promising stuff. On the surface, it’s your usual brand of wave-based co-op gameplay as friends team up to tackle increasingly difficult baddies. However, communication is key, because each kill awards points to the players which must be spent between rounds on ammunition and firepower. Players running low on ammo need to ask point-heavy players to buy them more rounds, and the whole team needs to pool their individual resources in order to succeed.

It’s a really cool concept and should make Escalation stand out from other “Horde” style game modes.

5. Cyclonus, Dirge and Grimlock are in the DS version: 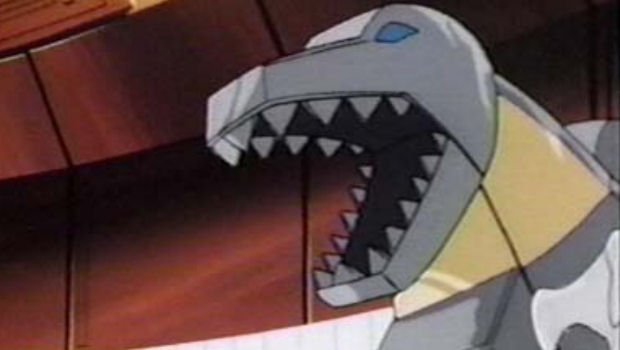 The DS version isn’t going to get as much spotlight as its console-based big brother, but it’s still a pretty ambitious little title. As well as a robust multiplayer game in which players can “wager” their leveled up characters against each other, WfC DS also gets ten all-exclusive characters thrown in simply because they were favorites of the developers. Cool characters like Cyclonus, Dirge and Grimlock have been tossed in, and although their transformations have to conform to the game’s four vehicle modes, it’s still awesome to see that they were included.

I briefly played the DS version and it seems to work similarly to the Revenge of the Fallen game, albeit with more platforming and a cool tag team system (and when you tag in Megatron, he says “Nobody summons Megatron” for a lovely movie callback). Not too shabby, and it’s clear they put some love into it. It’s also where I finally got to hear Starscream. He’s not quite as squealy as he used to be, but I am pleased to report that the voice actor made him sound like the serpentine prick he should be.

And that’s your five reasons why War for Cybertron has got the touch! I must say I was not disappointed by what I had played and this looking like it’ll be the game Transformers fans have wanted for years. At the very least, it’s chaotic, action-packed and very fun, and really, that’s all you could ask for in a game. It fills me with no displeasure to say that I have not been let down by this game.