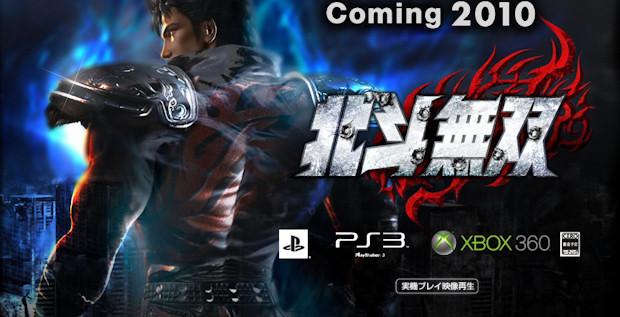 Okay, so there’s not really a lot to it yet, but if you’re eager to suck down more from Koei Tecmo’s Fist of the North Star Musou, there’s a teaser page up with swooping logos and the promise of a 2010 release date. Your excitement, it knows no bounds!

So far, this game is looking like it could be really good. The brawling gameplay and one-superhuman-versus-a-hundred-dumb-enemies approach to combat certainly won’t appeal to some, but those of us who know what to expect should be suitably amused. With Koei clearly putting a lot of effort into getting this right, it could be a winner. It already looks graphically superior to previous Dynasty Warriors games, and it’s not even finished yet. That’s a very good sign.

Here’s hoping that the post-apocalyptic Manga classic gets a good showing in this new game. It has the potential to make Tecmo Koei a major player if it goes well.